Let's face it...getting sick sucks. As a mom, I hate getting sick. I find it tough to take care of myself and get the rest that I need. Getting sick as a pregnant mom is even more challenging. I was lucky enough to breeze through my last pregnancy without even a minor cold. I knew it was inevitable when Jenn got sick two weeks ago. Sicker than I've ever seen her -- the in bed with a fever and chills for two days straight kind of sick. We sent her to the basement to rest. It still took her several days after those two days in bed to fully recover. During that time, the girls started waking in the night for various reasons. After several nights of this, I was exhausted. After 10 days straight of waking in the night multiple times, I was a walking zombie. I knew that sickness was inevitable.

It came in the form of a cold that start mildly last Saturday. By Sunday, it had moved to my head. The head congestion was brutal and I struggled to find a comfortable position to get some rest. I usually don't turn to OTC medications, but had I not been pregnant, I might have on Sunday. Here's what I did instead. This would be beneficial to anyone, from child to adult, during sickness. 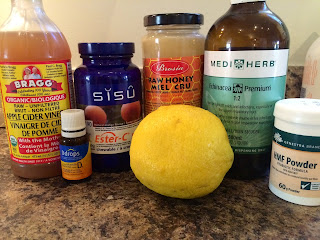 Is what I don't have.

While cleaning up after breakfast, this is what I looked over to see... 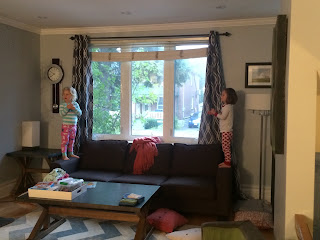 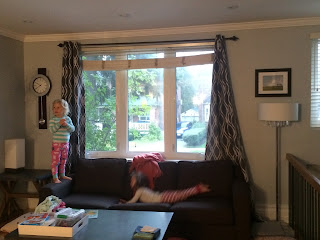 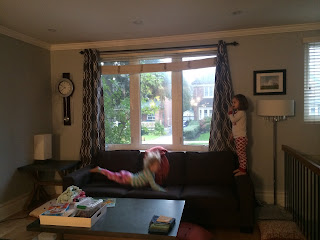 Yesterday's game involved standing on that window ledge behind the couch and then leaping from the ledge to the couch that was pushed out from the wall about 2 feet. Leaping over a 3 foot drop. Leaping down towards the edge of a coffee table. Right. Maybe if I hadn't had to deal with Quinn splitting her head, chin and lip open multiple times (including once on that coffee table!), I would relax a bit more.

They were watching an episode of Paw Patrol this morning before we left for school. They can't just sit on the couch. Some sort of questionable game always needs to be created.

They're having fun, which makes the game hard to stop. It's hard to let it keep going when injury, hopefully not serious, is highly probable.

Keeping these two busy and active is no easy feat. They get plenty of free time to run, jump, wrestle and play. We also balance that with some structured activities. They can do a 5K hike, play in the park for an hour and still have energy to burn. They are my karma.

The fall lesson round up...

Swimming lessons are a must in my books. While we aren't around the water as much anymore because we no longer have the cottage, I still think that learning to swim is critical. They have a half hour lesson once per week. They love their instructor and I've been thrilled with the quality of the lessons.

Gymnastics. My Mom and I started taking them when they were about 18 months. They have always loved it. It's a great energy burner and fantastic for building confidence, balance and agility. They're going to a new gym that has a great set up for little ones. Beams and bars at their level. A tumble track trampoline and lots of things to jump on and over. And, the best part is that they currently have a semi-private lesson so they never stop moving!


And finally hockey. As you've likely seen if you've followed my blog, the girls have been skating for a while now. With a former professional figure skater for a mom, I've been lucky enough to have someone who can help me get them out there quite often. My friend was going to enrol her 3 and 5-year old in a hockey program, so I decided to enrol T&Q too. She and I actually met when we were 14 and playing hockey through the same organization. Getting their equipment on has been the hardest part. It's bulky and they complain. Once they're out there though, they have a blast. The instructor has a few teenaged girls from the older teams helping her out. They've been fantastic with the little ones. They usually do a few short skating drills and then play lots of games, like What time is it Mr. Wolf? Anything to get the kids moving around and improving their skating. At their last class, the girls stayed on the ice for an entire hour. They were very excited to tell me that the instructor asked them both to demonstrate how to skate backwards for the class. They can thank Atty for that one! It's amazing to see how much they're improving each week. Quinn loves to move quickly and has enough balance now to do so. Teagan, the more cautious twin, has developed quite a bit of confidence.

And for all the activity in this household, I try hard to balance it with some quiet reading time each day. They will almost always curl up on the couch with me if I offer to read them some books. They both also love to do arts n crafts, so I always try to have supplies on hand for a quiet activity.

Well, we're nearly four weeks into JK. There are still some strong emotions rushing through the house, but overall, things have mellowed.

Teagan still has some anxiety over drop off in the mornings. She wavers between being excited about school and telling me she doesn't want to go. We've found a routine that works though. The ECE meets her at the gate of the kindergarten playground and walks her in. She really only has to hold T's hand for those few steps in and then she's fine. On the walk to school, T usually tells me that she's going to be brave. In the evenings and on the weekends, she talks about school very positively. This past weekend, she told me how much she was missing her teacher.

Teagan has been a fantastic source of info into their school life. She has told me all about the different activity centres in the classroom -- the room is split up into several (not sure how many) educational and play areas. She's talked about a writing centre, painting centre, drama corner, carpet construction (building blocks), arts n crafts, play dough. The kids can select to spent one period, about 20 minutes, at a centre. She says that they have to sit quietly on the carpet and raise their hand when the centre of their choice is mentioned. "If you shake your arm or yell 'me, me!', you don't get picked!" She tells me. The girls usually pick different activity centres, but told me that they decided to do carpet construction together the other day. They built a castle with a bird house. Once the period ended and the class had assembled on the carpet, the teacher asked Quinn to explain what they had built. She was apparently feeling shy that day so Teagan jumped up and explained their creation.

When Teagan starts telling me a story about school, Quinn usually chimes in too. She's generally not as willing to share details, unless she's in the mood. I usually ask about lunchtime as well. Apparently, they have a very strict lunch monitor. She might look like a sweet, old grandmother, but from the sounds of it, she's far from it! They must all sit at their placemat -- no moving and no talking! Talking is met with a quick, "zip it!" I can't blame the woman. She's trying to keep 25ish 4 and 5-year olds calm during what could be a very messy and loud lunchtime. After lunch, they head out to the playground. The playground stories are usually my favourite. The girls do share some friends, but seem to have made their own friends as well. I only wish I could be a fly on the wall of that playground! Teagan has become good friends with the daughter of one of my childhood friends. It has definitely brought back memories!

I've been thrilled to learn that they get a ton of outdoor playtime. They are usually out for close to an hour after lunch. They also get one or two other outdoor playtimes during the day, between free play and gym class. It sounds like the teacher does "outdoor classroom" a few times per week as well.

T&Q aren't sleeping as much as I had hoped overnight. They need a lot of sleep too -- they come by this honestly. I'm the same way (as is most of my family). I'm finding that the lack of sleep is affecting their mood as the week goes on. I spoke with their teacher last week and have decided to let them do a half day once a week so that they can nap in the afternoon. I kept them home last Thursday afternoon and they both ended up sleeping for two hours. Clearly it was needed. I really don't want to push it and know that lack of sleep will end up leading to an increase in colds and other sickness. Their teacher said that I'm one of many parents making arrangements like this and is 100% ok with it. JK is optional for this very reason -- many kids aren't ready for the full day.

Making lunches for the girls has been a lot more fun than I had anticipated. They often come home and tell me how much they loved their lunch :) Pretty sweet coming from 4-year olds. I've been trying to get creative with it. I bought them each a Yumbox and so far, I've been thrilled with it. It holds a good amount of food and doesn't leak. Everything stays in its respective compartment, even liquids.

Here are a few of the lunches that I've made since they started school. I'm definitely not the best food photographer, but you'll get the idea. They need to have enough food for a morning snack, lunch and an afternoon snack. I always send two additional containers for snack, but those are only pictured below in one photo. 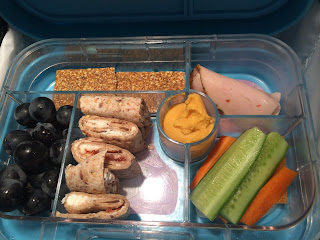 Homemade chicken and wild rice soup, rice crackers and cheddar cheese, tomato and avocado salad, kiwis, animal cookies. Snack is carrots and apples with granola bites. The bag has snap peas in it. 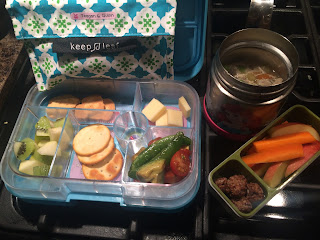 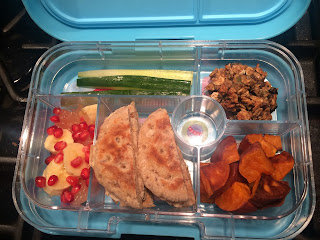 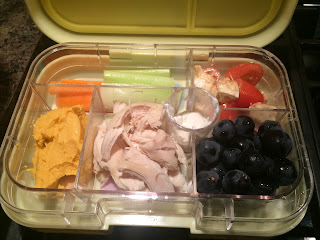 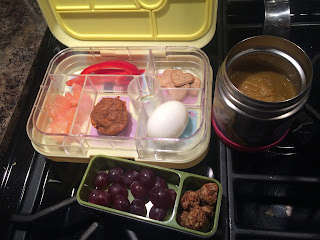 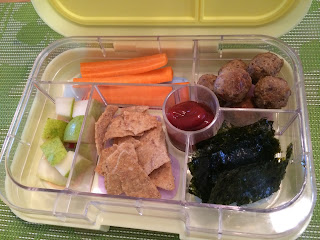 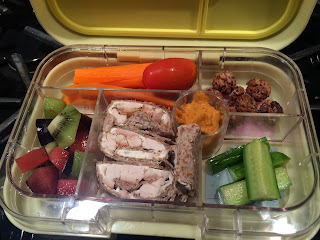 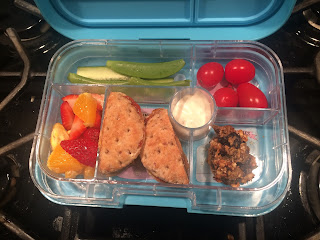 It gets a bit tricky because I only want to make one thing for lunch, but have kids with different tastes. T loves beans and legumes, but Q doesn't. I guess at some point, I'll have to send different things on occasion.

What do you send in your kids' lunchbox? Definitely share your ideas. It's going to be a loooooong school year!
Posted by Ashleigh at 1:47 PM 1 comment: