Logan has been eating solid foods for about a month now. Initially, I had planned to puree a few different fruits and veggies for the first couple of weeks, like I did with the girls. Then, I planned to move on to chunkier mixes and large pieces (baby-led feeding style). Logan had other plans.

After weeks of watching us eat, I assumed that he would go nuts for solid food. I roasted and pureed some organic butternut squash. He opened his mouth, took in the tiniest bit of squash, gagged and then spit it out. He then acted grossed out and disinterested! 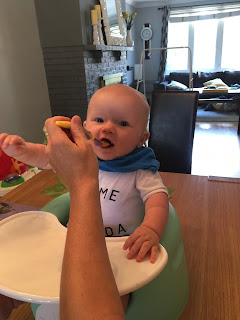 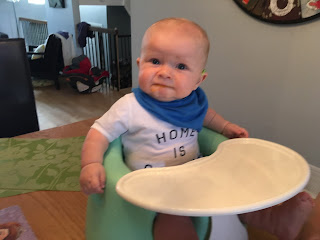 After trying him with the squash for a few more days, I decided to hold off for another week or so.

I quickly realized that the kid has no interest in being spoon fed (by me)! I've always loved Baby Led Weaning's motto, "Food before one is just for fun", however I prefer to call it 'baby-led feeding' because I have no interest in weaning him at this stage.

He's a good-sized baby who is getting everything he needs from breast milk, so I decided to take a very laid-back approach to food. It's very messy. Sometimes he eats a little bit of food. Sometimes a lot. He's happy and loving it though. And messes can be cleaned up (I remind myself over and over again) :)


After a few weeks of mostly playing with different fruits and veggies, he figured out a way to grip the food and gnaw pieces off. It really has been a fascinating process to watch. He's a determined little guy. He did a great job of holding onto the peaches (pic below) in order to suck the juices out and even pull off little pieces. He only recently got a tooth (in the last few days) so he is completely toothless in all of the pictures in this post. 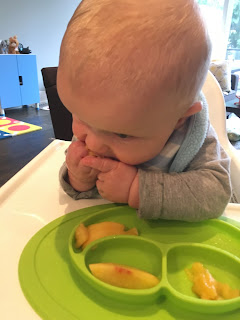 I love this series from his first experience with broccoli. Clearly unsure, he decides to try it anyways and ends up loving it! 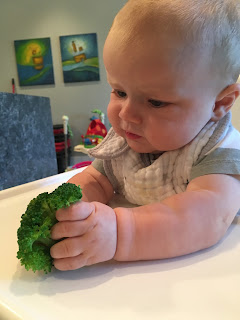 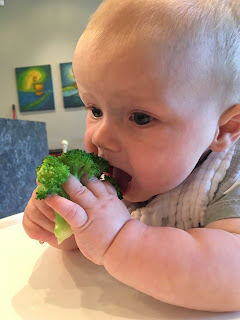 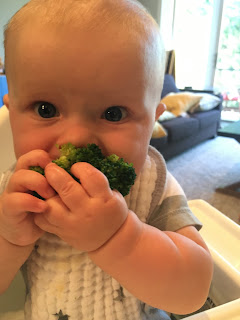 Despite what some people might say, my personal and professional belief is that sweet fruits and veggies don't need to be given after those that are less sweet. Breast milk is incredibly sweet itself, so babies are used to that. Logan happily devoured broccoli (above) and a pea and mint puree (below) after trying apples, bananas and peaches.


When I introduced solids to the girls in 2012, it was advised to wait and introduce certain high allergen foods (like nuts, eggs, fish) closer to one year. Now, in 2016, allergens should be introduced ASAP. What? Confusing, I know.

My unsolicited advice (because we all love that!) and approach with my own kid...do some reading. Talk to a few trusted friends. Talk to a nutritionist or a naturopathic doc. Then, decide on an approach that works for you and your baby. I've decided to start with fruits and veggies. Plant-based proteins next. Logan tried some homemade chickpea burgers the other night and some lentils as well. He has also had some butternut squash soup that I made with homemade chicken broth. I will likely give him some meat in the next week or two.

I did introduce him to eggs the other day. This was a biggie since we recently discovered that my niece is allergic to eggs. Fortunately, Logan had no reaction, but wasn't all that interested in the eggs. I'll probably make some a scramble with veggies next. Peanuts are also a biggie because my brother is allergic to them. I will most likely give him tree nuts around 9 months and then peanuts shortly thereafter.


I know that choking is a concern for many with this approach to food. It's a valid concern! Admittedly, I feel a little bit nervous about it too. But, I'm prepared. I'm always close by when he's eating. I give him very large pieces of raw fruits or veggies. I've taken an infant CPR course should it ever come to that. It's good to remember that gagging is completely normal when food is being introduced for the first time. Babies are learning how to move their jaws and tongues. After six months or more of only consuming liquid, something chunky is often going to cause a baby to gag. This is the only way for the gag reflex to develop. Logan has reminded me of Teagan. She used to gag/choke all the time. Outwardly, I always stayed very calm with Teagan. I would unbuckle her, but never touched her if she was coughing or making noise. She always managed to cough up or swallow whatever had gagged her. Then, she would go right back to eating. Logan has had similar gagging incidents and has always managed to work it out on his own.

The nutritionist in me has absolutely loved watching him experience food for the first time! Now that we are doing it his way, he seems to love it too. Stay tuned for more food posts!

Sorry, Logan. August was a wildly busy month for our family, so poor Logan's 6 month post didn't make it to the blog. It was celebrated though! And, just like that our not-so-little guy is 7 months old (+a few days)! 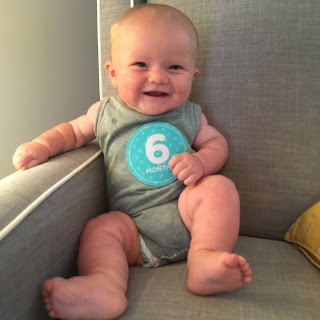 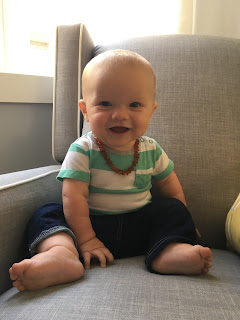 He absolutely adores these two! 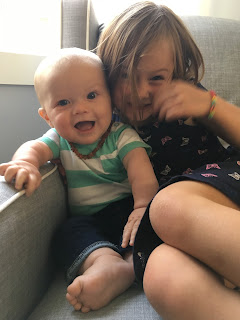 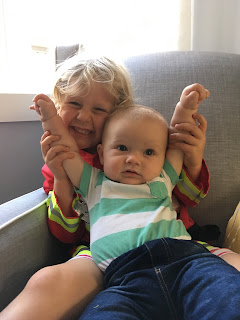 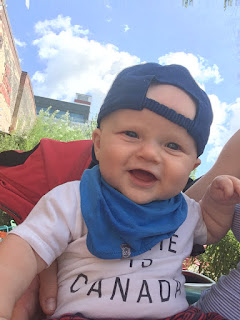 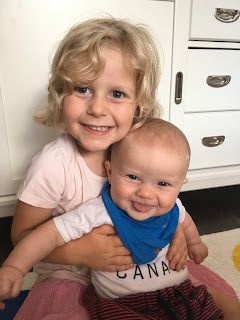 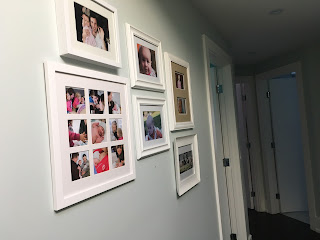 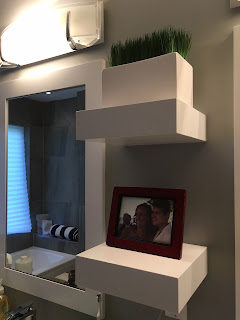 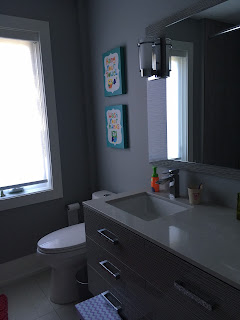 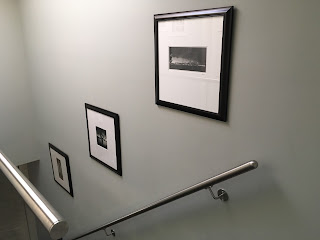 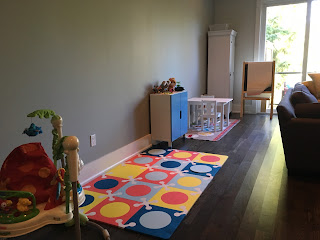 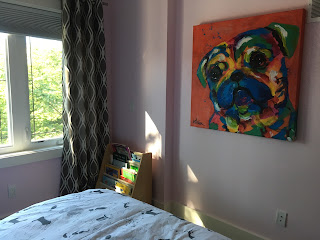 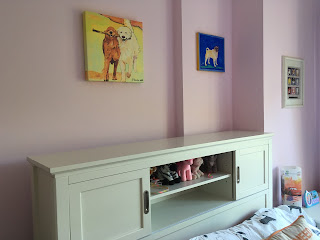 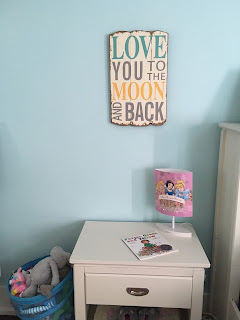 Jenn took a few weeks off around the closing date of our new place. Moving is always an ordeal, but it was especially nuts with three small children in tow. But, we did it! We are settling in and it feels more and more like home every day.
Posted by Ashleigh at 10:57 AM 3 comments: