After two standard newborn hearing screens and two rounds of much more involved testing, Logan has been diagnosed with profound sensorineural hearing loss (SNHL) in his left ear.

From my understanding, this means that the nerves that transmit sound from his ear to his brain didn't fully develop. During the testing process, they would send sounds into his ear to watch for the brain's response. The frequency had to be increased significantly (up to the level of a jet engine) in order to see a possible slight response from his left ear. So, his hearing loss has been deemed profound meaning there is little to no hearing in that ear. As a result of such extreme hearing loss, there are going to be several options available to Logan. More testing will need to be done in order to figure out what is going to work best.

When some people find out about Logan's hearing loss, they ask about the other ear. Once I say that the right ear currently hears normally, the response is often, "Oh well, at least he has one good ear." Yes, we are definitely lucky that he has "one good ear", but he is going to be faced with many challenges that most people would never consider. Our bodies were designed to have two ears that work together. During my research, I came across this, which I found interesting:


To your brain, one ear + one ear = three!  A sound that is barely audible at 20 feet away with only
one ear is easily audible at 30 feet when two ears are listening. This is called the binaural
summation effect and is the result of the two hearing nerves crossing many hundreds
of times before the information reaches the cortex.

Logan doesn't simply hear half as well as the rest of us. From the time he was born, I noticed that he seemed to get overwhelmed and upset in noisy or chaotic environments. For those of us with two hearing ears, we can take in all the sounds that we hear and easily filter out what isn't important to us at the time. For Logan, all of the sounds and speech in a loud environment overload his right ear, making it difficult for him to filter out what he doesn't need to hear. There are times when I feel overwhelmed in a chaotic environment, so I can't imagine how he must feel. It can also be difficult for him to determine where sounds and speech are coming from, which is why he might not look at someone immediately if they speak to him. Listening with just one ear can be tiring and can require much more effort. These are the challenges that he is being faced with at just 4 months old. As he gets older and eventually goes to school, the challenges will only increase. It's hard to not think about the future and how he will do in school, sports, activities, social settings and from a safety perspective.

We are extremely fortunate to live in Toronto, the home of a world renowned children's hospital, Sick Kids. They are currently doing a study on cochlear implants for unilateral hearing loss in babies. This work is only being done in a couple places around the world and the doctor we were lucky enough to see last week, is at the forefront of cochlear implant research. We had met with an audiologist before our appointment with the doctor. By the time he came in, I was feeling a little overwhelmed and didn't think to ask several of the questions running through my head. We are heading back there in the next few weeks because we have decided to start out by getting Logan fitted for a hearing aid. While this likely won't help him much, because his hearing loss is so severe, it will be a chance for him to get used to wearing something on his ear/head. More testing will be required to see if Logan is a candidate for an implant. From the sounds of it, early intervention is key. Implanting as a baby will have a dramatic effect on the way his brain will develop.

For now, I'm in information gathering mode, trying hard not to get too overwhelmed. I definitely do feel sad when I think of the challenges that are ahead. It could be worse though. So much worse. I can certainly put things in perspective, especially when we walk into Sick Kids.

Slight segue....I've been doing a spin class (babies allowed!) to kick my butt back into shape. I've been told repeatedly that I need to protect his good ear, so he wears his ear muffs and looks ridiculously adorable in them! I love them, Logan does not. He figured out quite quickly how to knock them off. The lucky little dude usually gets to leave the room and hang out with one of the people who works at the studio! Spoiled guy ;) 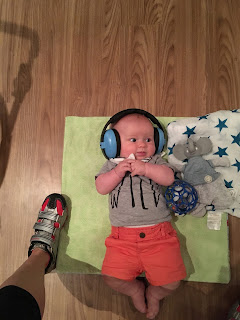 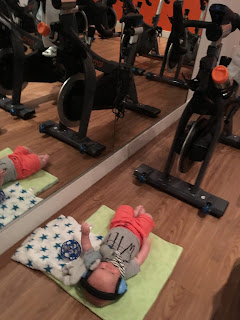 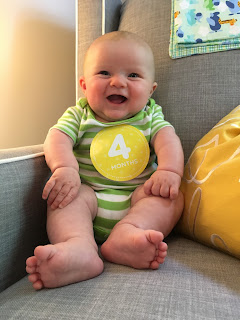 I have two 5-year olds (as of May 29th!). Kids, not toddlers. I've been particularly nostalgic this year as I watch Logan and am reminded of the girls at this stage.

Teagan and Quinn were extremely excited to turn 5 this year. These days, there is a big focus on who is what age. They were given a hard time by their friends who turned 5 late last year or early this year. Not surprisingly, they quickly forgot how much it bothered them and immediately started talking about how their friend, H, was "only" 4. I asked them how it had made them feel a few months ago when their friends did the same thing. "Sad", was the reply. They quickly stopped. 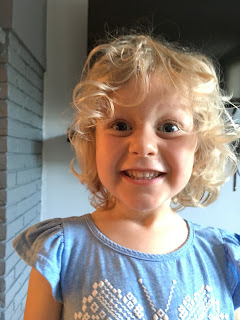 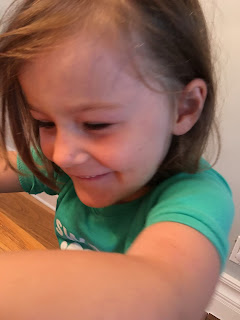 Posted by Ashleigh at 3:13 PM No comments: