17 months, plus one day! With every day that passes, I feel like they are becoming more kid-like and less baby-like. Bittersweet for sure. 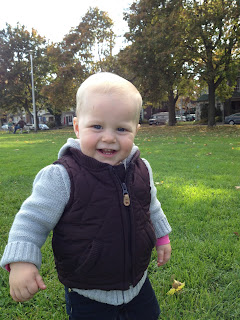 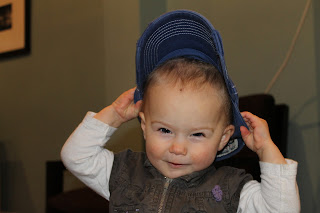 The Puppy and the Tiger

Halloween is upon us once again! The queen bee and monkey from last year have morphed into a puppy and a tiger! Once again, we attended the 519 Community Centre's kids Halloween party. The girls had a blast running around the room playing with the various toys and dancing to the music. Miss Quinn even had her first dance with a boy!

[Jenn wouldn't come out from behind the camera, hence no pictures of her!]

Sorry for the lack of blogging all week. It was a long and busy one.

Last Sunday, my family went to the funeral home to say our private goodbyes to Nana. On Monday, there was a public funeral and reception.

Initially, I thought that the girls should not attend any of these events, in case they were disruptive. So, to my surprise, my Dad's response when I asked about the girls attending was, "they can absolutely attend..." It got me reevaluating my initial thoughts. While they are only 16 months old, I realized that it was important for them to be included (for them and for us).

Last Wednesday, a few hours after Nana passed, my family and my aunt, uncle and cousin met at my parents' house. Again, I worried that my two tornados would disrupt everyone. It was actually the complete opposite. Quinn only wanted to be in my Dad's arms so that she could give him hugs and kisses. The girls lightened the mood and even gave everyone permission to smile.

Arriving at the funeral home last Sunday, we all walked into the room where Nana lay in an open casket. After allowing my Dad and my aunt a few minutes next to Nana, I approached with Teagan in my arms. We have to say bye to Nana, I told her. Teagan then pointed to Nana, waved and blew her kisses. Quinn did the same. It was incredibly sweet and brought tears to my eyes. The girls quietly walked around the room until we were all ready to go to dinner.

On Monday morning, we arrived at the church for the funeral. Our family was seated in the two front pews. It would be easy to dart out the side door if one of the girls started acting up. Teagan did leave the service part way through but only because crinkling every paper in sight and chatting away was far too appealing. Quinn, on the other hand, stood quietly on the lap of Jenn or my brother with her hands on top of the front pew. She stared intently at the Reverend and swayed to the soloist's beautiful rendition of On Eagles Wings. The girls then charmed Nana's family and friends at the reception that followed.

At 16 months, I would have expected them to not understand. I didn't give them enough credit. While I know that they cannot understand death at such a young age, they definitely understood on some level. I'm grateful that I didn't listen to my initial thoughts and allowed them to say their goodbyes to Nana in their own way.
Posted by Ashleigh at 10:01 AM 3 comments:

My grandmother passed away yesterday afternoon at the age of 100.

At the age of 100, you can imagine that Nana had a few aches and pains. She never, ever complained. For the last few months, she had to spend the majority of her time attached to an oxygen tank. But, whenever I would walk in there with the girls in tow, a smile would always cross her face. How are you, Nana? I would ask. Oh I'm pretty good! She would often answer in as chipper a voice as she could muster up.

Nana never understood the concept of voicemail. Since the girls were born, she would call me quite frequently to check in. The "girls" (aka. the nurses and support workers at the her assisted living home) were always asking about when the twins were coming for a visit. If we weren't home, she would sometimes leave a message. The message typically only contained two words, Nana. Called. We would often get a good chuckle from her messages!

When the girls were only a few months old, I remember popping in for a surprise visit while Nana was in the dining room eating lunch. She was sitting at a table with two of her friends. The room was full. As you can imagine, when I walked into an assisted living home with infant twins, heads turned and residents came rushing up to me as fast as their walkers could take them. With a smile on her face, she proudly introduced us to her friends.

As a child, I remember my grandparents going on long walks on the beach when we were down at their condo in Florida or up at our family's cottage in Muskoka. Even into her 90s, Nana kept walking. At the cottage, she would walk the deck for her exercise. She would always smile and wave at us through the large windows. She adored sitting in the sun. I remember one of the nurses telling me over the summer that Nana had sat outside for over two hours basking in the sun!

I'm so grateful that the girls got to meet their great-grandmother. I saw her for the last time on Monday. She was very weak and tired. She wasn't able to say or do very much. As we were leaving, Teagan and Quinn waved to Nana and blew her a kiss. She managed to lift her hand up and give them a wave.

Rest in peace, Nana. You will be missed. 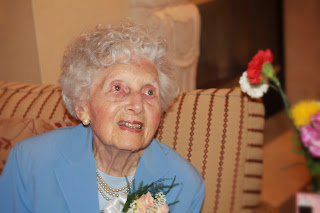 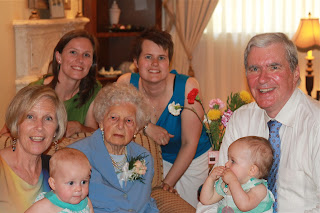 Before the girls were born, Jenn and I would eat vegetarian meals several times per week. Since I started breastfeeding though, I feel like I'm constantly craving meat because my appetite is endless. Lately, I have felt like we've been eating a lot of meat and went on the hunt for a delicious vegetarian recipe.

I subscribe to a fantastic vegetarian blog, Vanilla & Spice, written by a fellow Canadian. I have made several of her recipes. I especially love her healthy bars and cookies. I frequently make them as snacks for the girls (which I will also blog about). I perused her "blogs I follow" section and came across a delicious sounding black bean recipe (Chipotle Butternut Squash, Black Beans and Goat Cheese Tostados) on Naturally Ella's blog.

Since I was making them for the girls first, I modified the recipe slightly. With several sweet potatoes on hand, I used those instead. Personally, I find them a little bit too sweet for the recipe, hence the recommendation of butternut squash. I sauteed the onions before putting them on the tostado because I find that raw or nearly raw onions are a bit too harsh for the girls just yet. Lastly, I toned down the chipotle chill spice slightly.

It was quick and easy to prepare and came out of the oven looking delicious. I added some avocado slices on the side et voila! 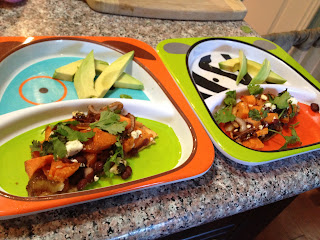 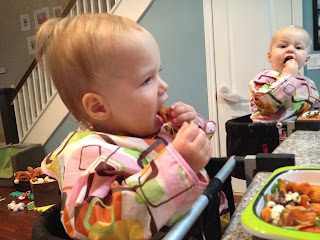 I have to say, one of the fun things about having kids is dressing them up. It's hard not to look at a pair of miniature faded skinny jeans and say "awwww!" For most of us, dressing up our little girls in party dresses is a rarity. Therefore, we need to take full advantage when there is a special occasion!

My cousin was visiting from New Zealand so a family brunch was in order. Brunch called for party dresses!

A few shots with the grandparents!

TT's got the moves

First off, I'm sorry about the video on the previous post. I have no clue why it won't post correctly. I think there may have been an issue when I downloaded it off my iPhone.

Upwards and onwards though. A new video.

In the morning, after the girls have their breakfast, the kitchen is usually a mess and I still haven't eaten. Keeping them in their chairs, I will sometimes pull up a Sesame Street music video or the Baby Einstein Neighborhood Animals video on YouTube. The 10 minutes allows me to get a ton of stuff done. [Don't flame me anti-TV readers!]

The other day I put on the Neighborhood Animals video and Teagan went nuts. I was wishing I had my phone out to capture it. This morning I was successful!

I hope this one works!

Teaching a toddler how to share can be painful at times. You feel like a broken record. You feel like you're talking to a wall. Or worse, like that teacher who no one listens to despite total understanding.

But, for all of those attempts at teaching toddlers how to share, there is one awesome success story that trumps them all.