Christmas came early with a trip down to Connecticut to visit Jenn's family. Jenn's sister, Chrissie, and her husband, Ryan, were fantastic hosts, as usual! For weeks, when the girls were asked what Santa was going to bring them, they would answer excitedly, "an orange!" Little did they know what was in store for them! We all had a blast celebrating Christmas. It was a total whirlwind with the girls opening up presents in record time. Jenn's family spoiled them with clothes, toys and even a fire station tent!

We were lucky enough to be down in CT during the massive ice storm that hit Toronto. Apparently, our power was out for over 24 hours. We were lucky. I know a few people who still don't have power. Going on 6 days. An ice storm meant that our flight on December 23rd got canceled (although we weren't informed!). After getting the girls up at 5am, a 2 hour drive to the airport and then a 6 hour wait, we finally boarded a flight to Montreal. And after another 45 minute wait to get our scheduled 11:30pm flight to Toronto changed, we grabbed some dinner, waited a few more hours and then boarded our 8:30pm flight home. My brother was kind enough to pick us all up at the airport and we finally got the girls into bed at 11:15.

Despite being up for about 18 hours with only a brief nap, they were fantastic. Jenn and I couldn't have been proud of the way they took it all in stride. Long, boring waits. Very long lines. Both girls even threw up all over the airport (Q in Toronto and T in Montreal). Despite it all, they never complained. They were my constant reminder to smile and know that we would get home eventually. It could have been worse.

Christmas Eve began with a "sleep in". We were happy to roll over and see that it was past 7:30am when we heard little feet coming down the hall. Jenn and I divided and conquered to get the last few things that we needed before our family Christmas Eve dinner (that we were hosting). After a great dinner with the whole family, the last presents got wrapped and Santa asked for our help putting together some presents (Michael and Paige took on the challenge of the trampoline!).

I was probably more excited for Christmas morning than the girls. After all, we could have put an orange under the tree and they would have been happy. Jenn rushed down to grab her camera. Once again, present opening was a whirlwind! While the girls played, we ate muffins and fruit. We eventually packed up and headed over to my parents place for brunch and more presents. After two rounds of present opening, the girls were old pros. Not surprisingly, Grandpa spoiled his girls. 3 hour naps were had. Party dresses donned and guests arrived. A delicious feast and superb wine was enjoyed by all. It was a fantastic Christmas.

The girls were still buzzed from all of the Christmas excitement this morning. They played for hours and eventually passed out from the overstimulation for another 3+ hour nap. We headed out on a snowy walk with the dogs, had dinner and then spent ages settling the girls for bed.

Nothing better than Christmas through the eyes of a child! 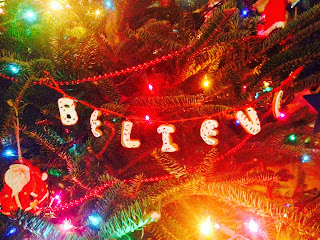 A few pictures from the last few days!