We just returned from our long-awaited three week trip to Florida (two weeks for Jenn). It was absolutely fantastic for many reasons…one being a three week escape from winter! The four of us have really felt the cold during these last two days!

We were lucky enough to get to stay in a gorgeous house that my parents had rented. It was just steps from the beach and had its own pool. The weather was perfect -- high 20s C/mid 70s F -- but the humidity often sent the thermometer to 30C (low 80s).

The girls and I flew down with my Dad, Rob and Kelly at the beginning of the month. My Mom was already there. If you know of the girls' love for their Uncle Rob, you can probably imagine how excited  they were to spend a week with him! They absolutely adore Kelly as well, and I feel so lucky to have her in the girls' lives because she is incredibly good with them.

The first week was tough from a sleep perspective. For the first few nights, the one or both woke up screaming in the middle of the night. They were clearly confused as to where they were. They would also wake up very early, likely from excitement. I would do my best to keep them quiet until after 7, at which point, we would head out to the kitchen to cut up some delicious Florida oranges and grapefruit. My Dad would always get up early to help me, which is always very much appreciated, especially when I'm sleep deprived. My Mom, Rob and Kelly were usually up earlier than normal (I think!), so they were able to help me out as well. 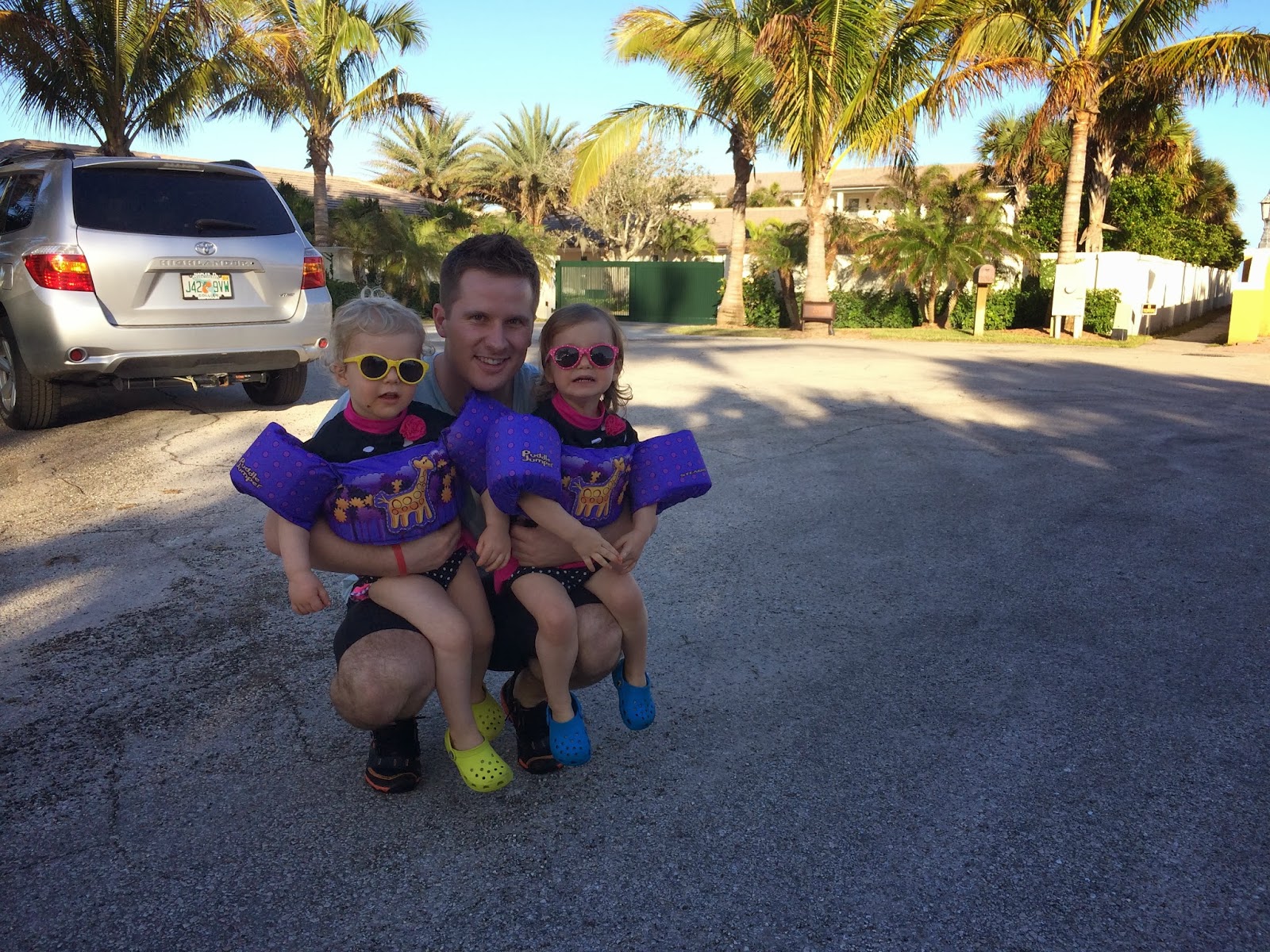 The girls absolutely loved running along the beach, especially when Rob and Kelly would run them in and out of the water. We realized quickly that Quinn was fearless and would have likely tried to swim in the ocean if we hadn't stopped her. We decided on the first day that we had to let her have a bit of a scare, but do it in a safe way. The next day, she ended up walking a bit too far out and got bowled over by a wave. She went under and spun a few times. I was right next to her so there was no real danger. Thinking that she would emerge startled, I was shocked when she stood up and laughed! Teagan was much more cautious, so that made things a bit easier.

Teagan became a pool water baby after just a few days. She loved doing "Superman" jumps to Rob. If you've got a toddler, I highly recommend Puddlejumpers. This was our first time using them and they were fantastic. The ones that we purchased in the US are approved by the US Coast Guard. They were comfortable for the girls and much less bulky than a life jacket. They also made it very easy for the girls to kick around the pool on their own. 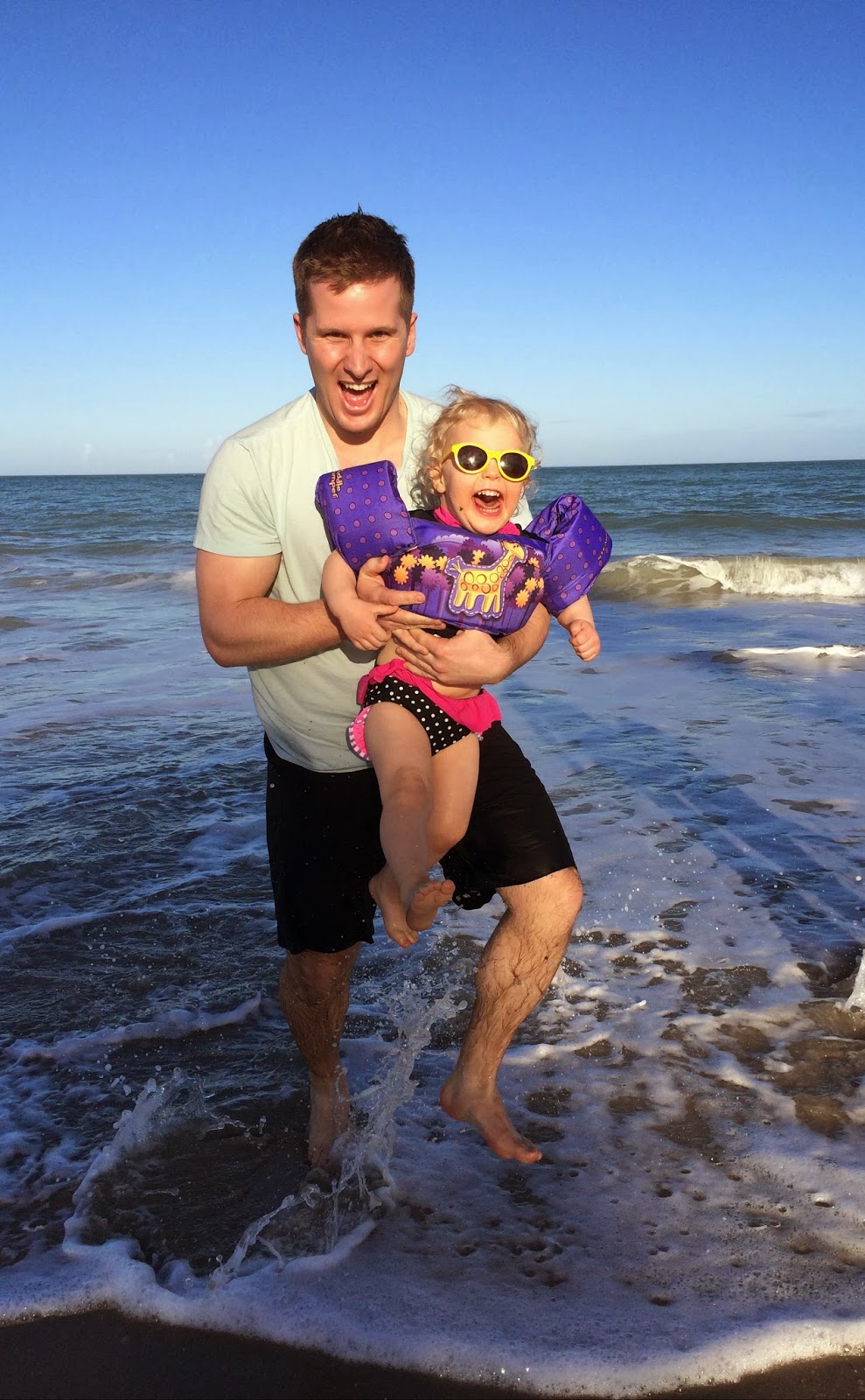 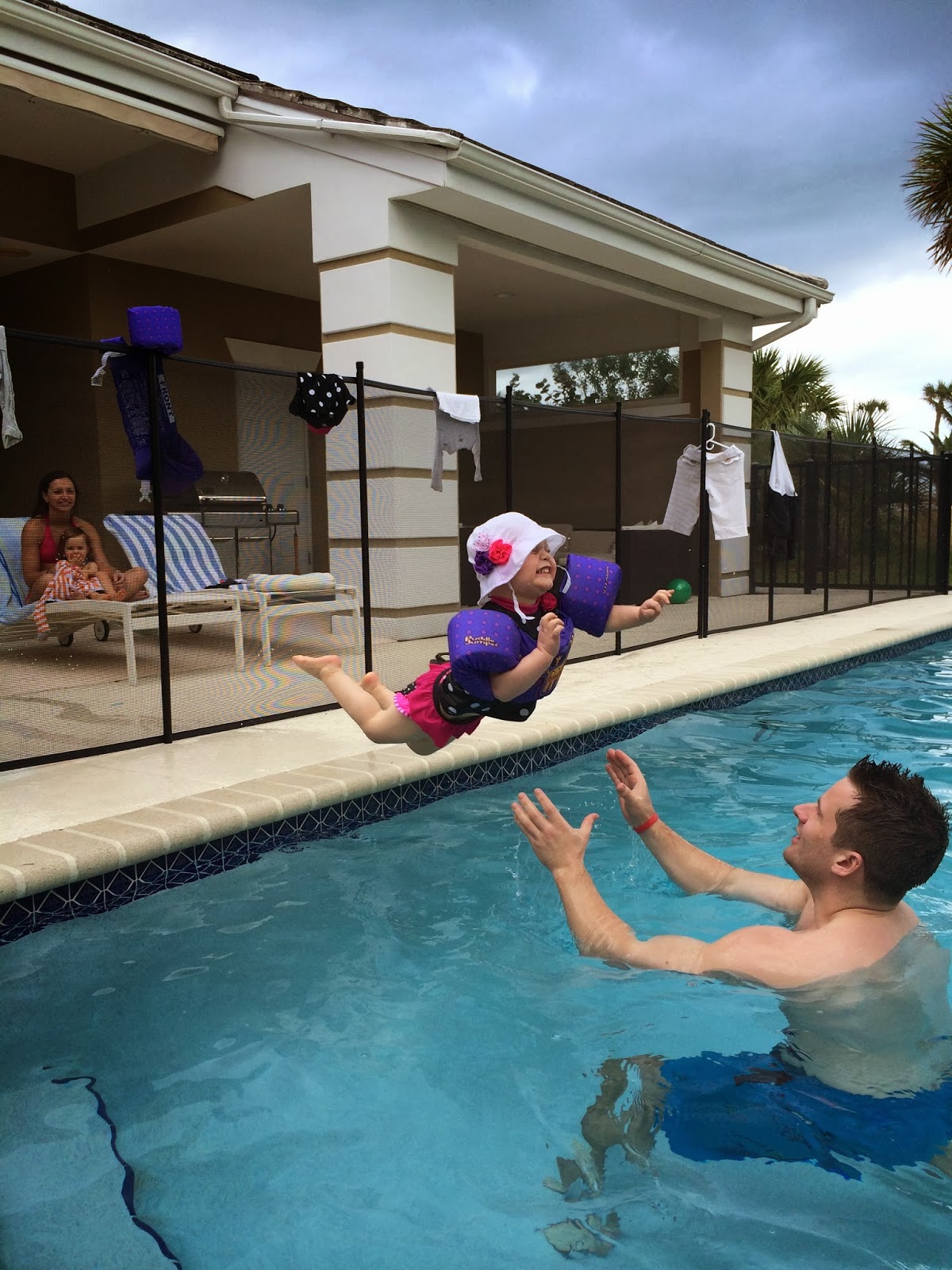 Kelly's Florida visit was too short unfortunately because she had to get back to Toronto before heading to Sochi for work! Rob and my parents left on the day that Jenn and Eva, our former night nurse, arrived. On that Saturday, I took the girls to their very first movie, Frozen! Fantastic movie if you haven't seen it. I got the girls a small bag of popcorn to share. While Teagan ate slowly, one piece at a time, Quinn hoovered it, finishing hers before Teagan had even finished half. Teagan was very into the movie and remained quiet, eyes glued to the screen. Q asked me many questions or added her two cents often and usually in a loud voice. Fortunately, we were surrounded by parents and children, who didn't seem bothered. Once she finished her extremely salty popcorn, she was out of her seat demanding that we leave. I kept her relatively happy and entertained for as long as I could. We left about 20 minutes from the end.

We had asked Eva if she was up for coming down to give us an extra set of hands. It was especially nice to have some help for Jenn on the first day of the second week when I came down with a nasty stomach bug. It was fast and furious and I was fortunately feeling quite a bit better by the next day. My stomach was still off though so I wasn't able to eat much all week. The girls sleep was still hit and miss, so between the sleep deprivation and the lack of energy from not eating, it was a bit of a tiring week. 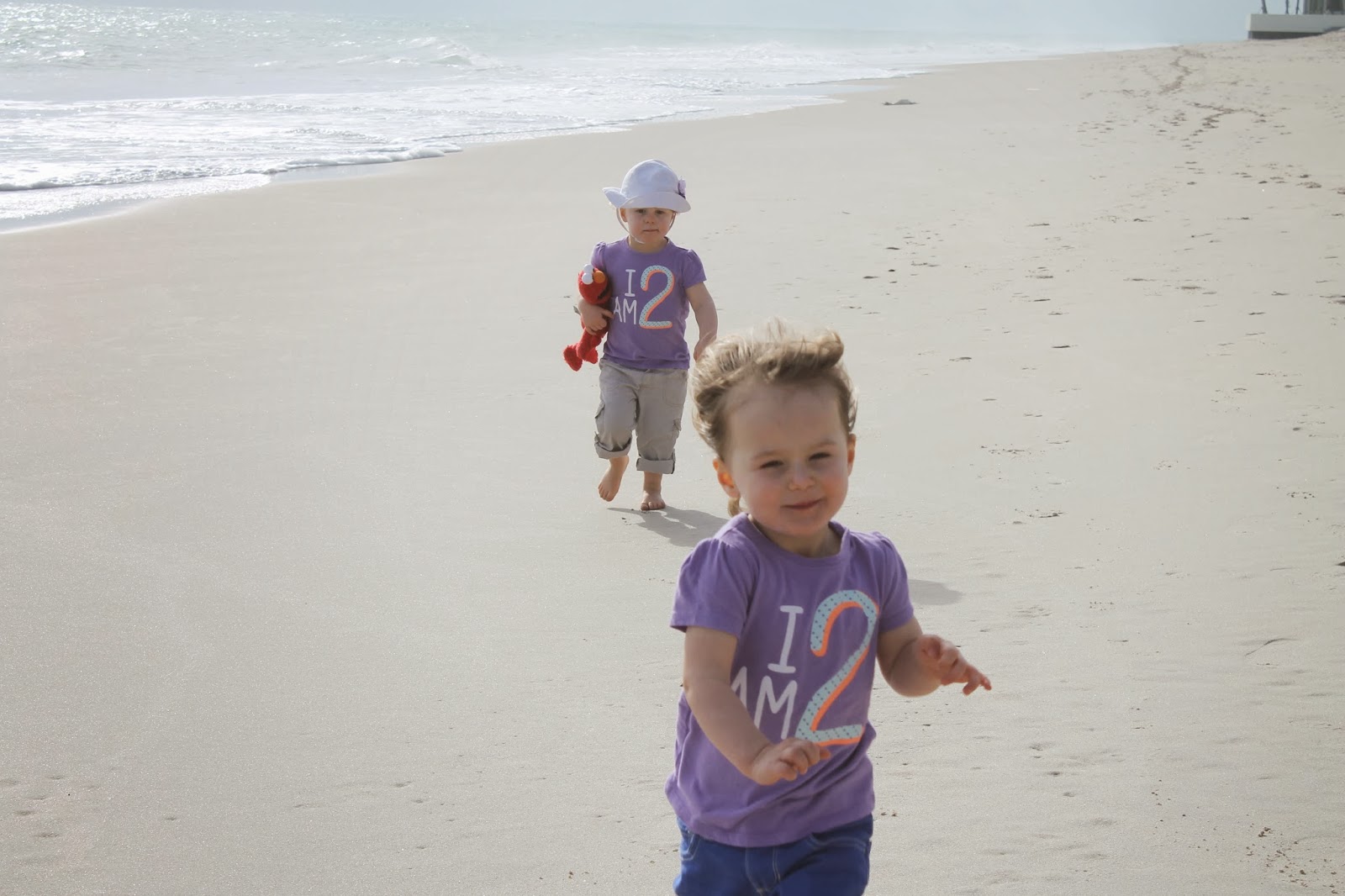 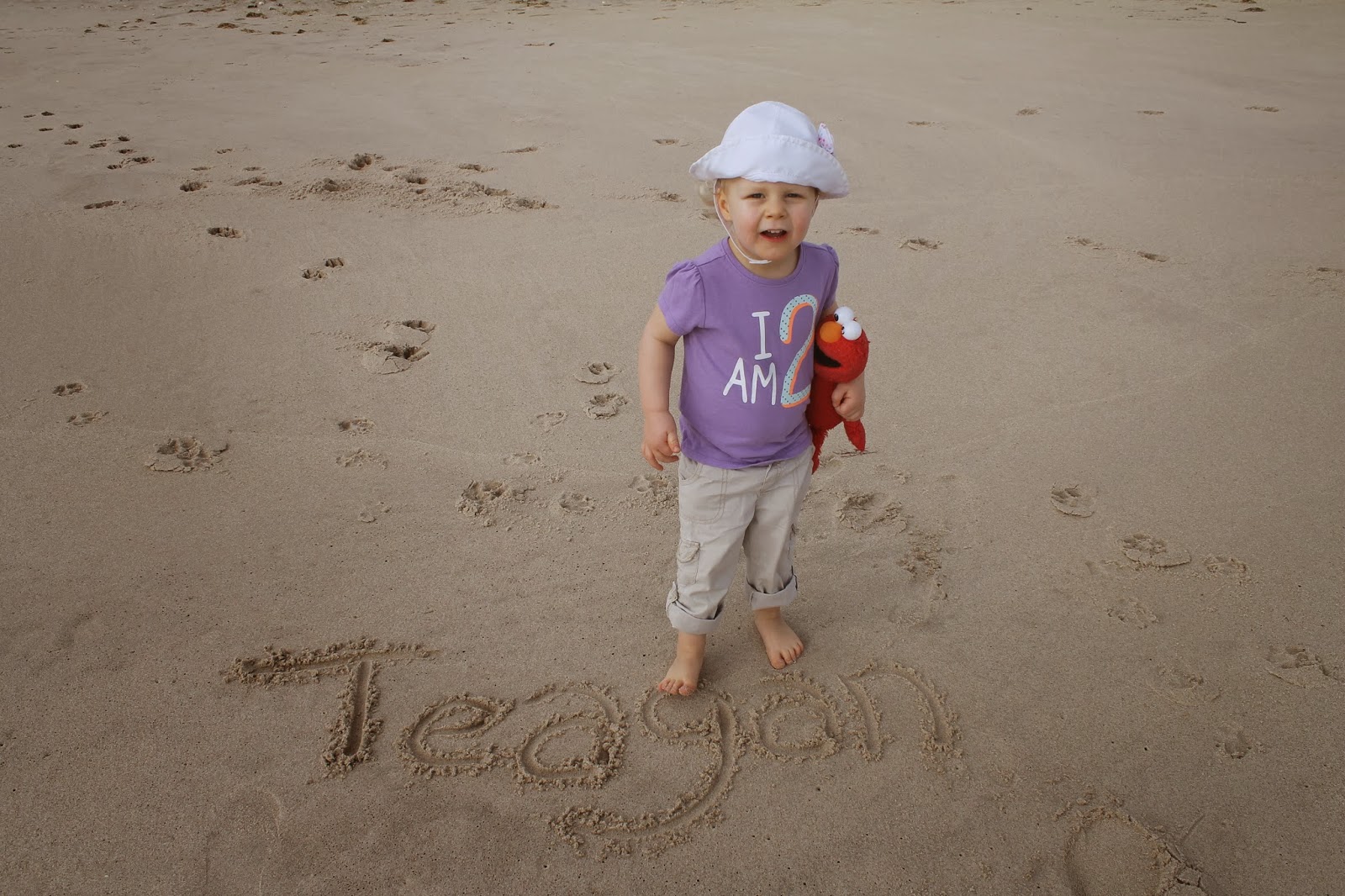 To change things up one day, we took the girls to an environmental centre that had a great discovery room for children. The room is run by extremely knowledgeable and friendly volunteers, who let the girls touch sea urchins, sea cucumbers, hermit crabs and other sea creatures. Our animal loving girls got right in there!

One early morning, I opened the shutters to the sun rising amidst the clouds. 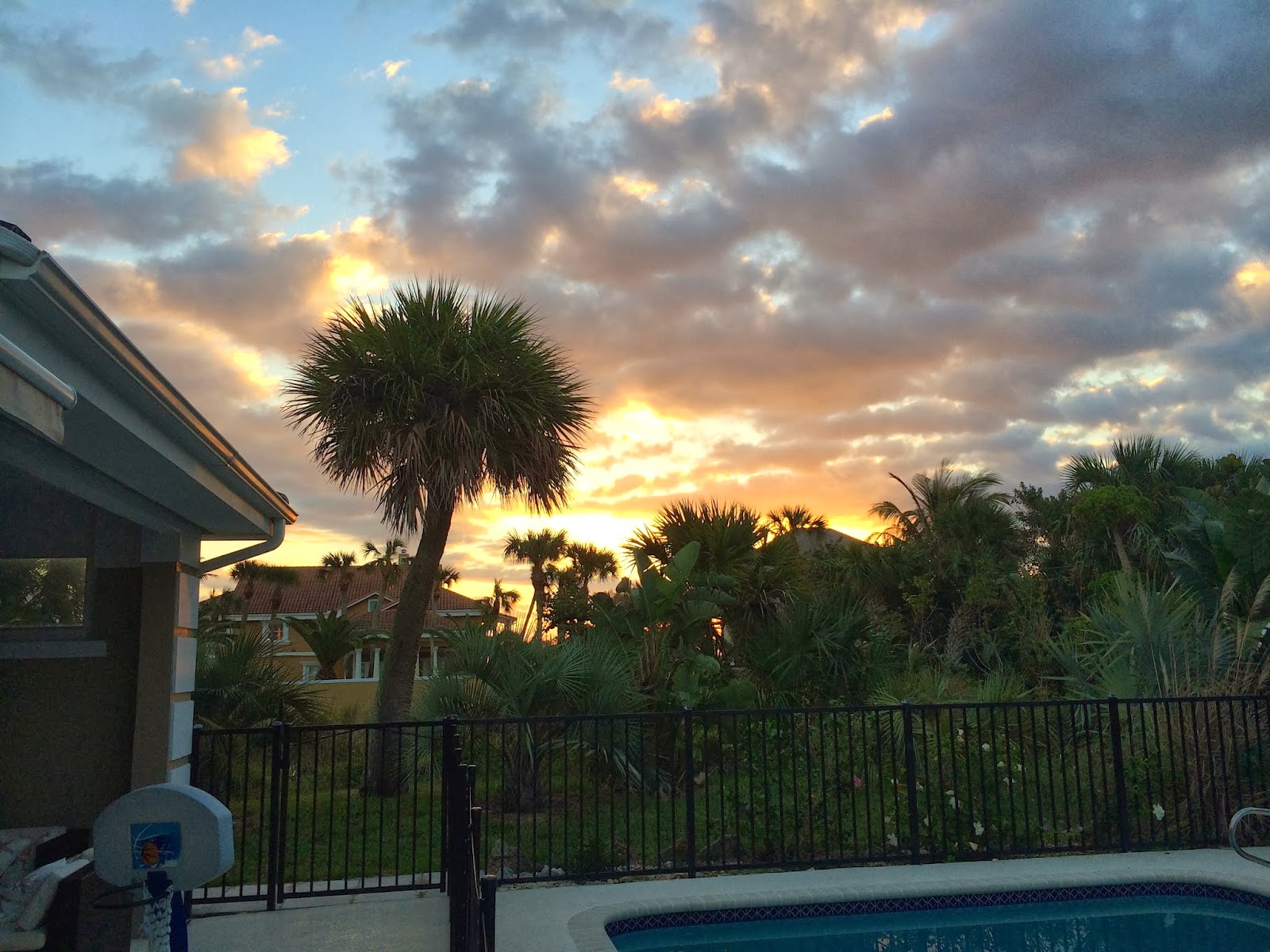 Another day trip included a visit to Lion Country Safari in West Palm Beach. The drive through safari was very interesting for Jenn and me. The girls quickly became disinterested. Being allowed out of their car seats (the safari is on a private road so we were told that this was allowed) for the very, very slow drive was much more entertaining. They spent most of the time strapping Elmo and Ernie into their car seats.

Once we got into the amusement park, the girls were in heaven hugging the goats and feeding the budgies and giraffes. 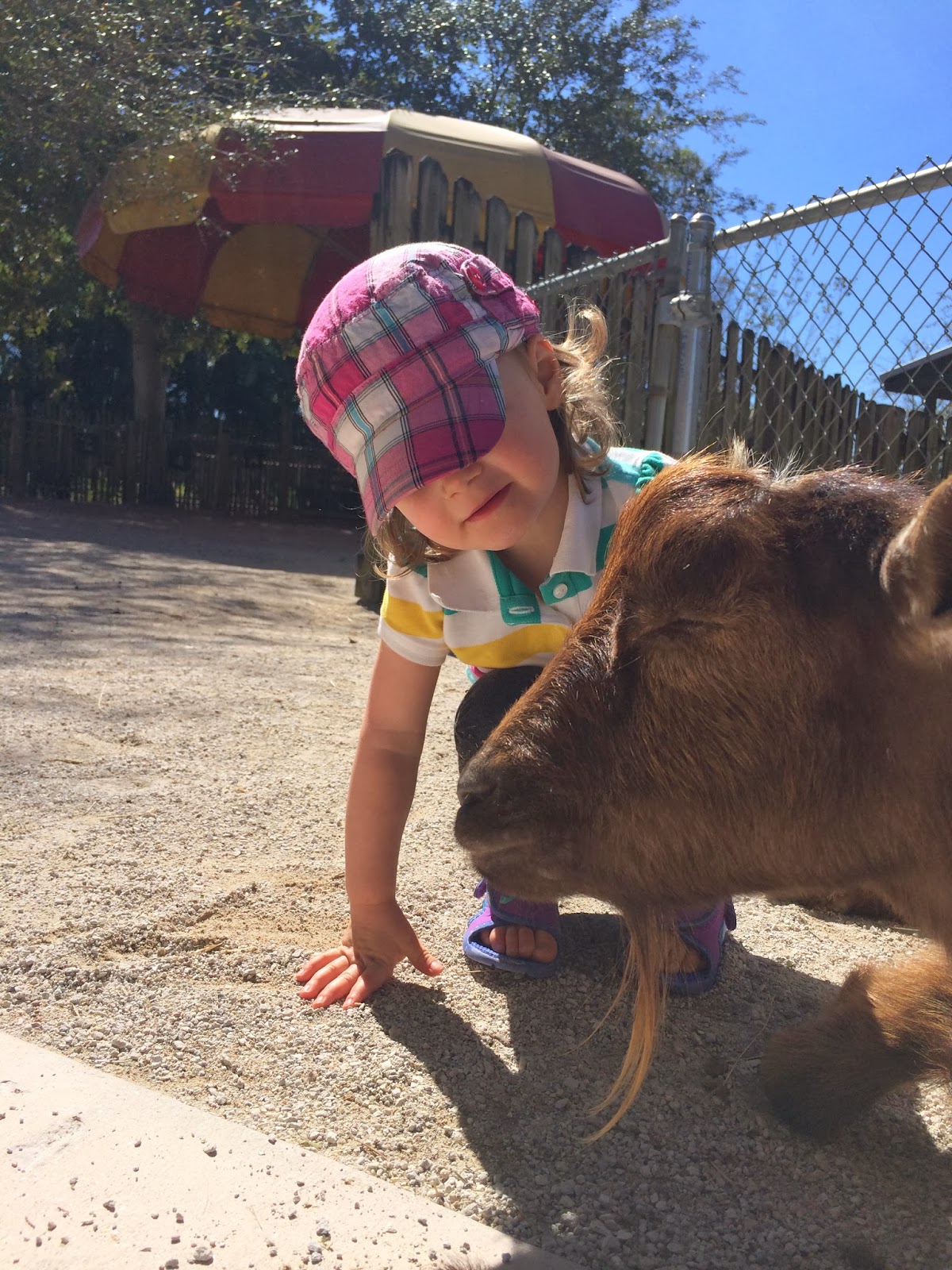 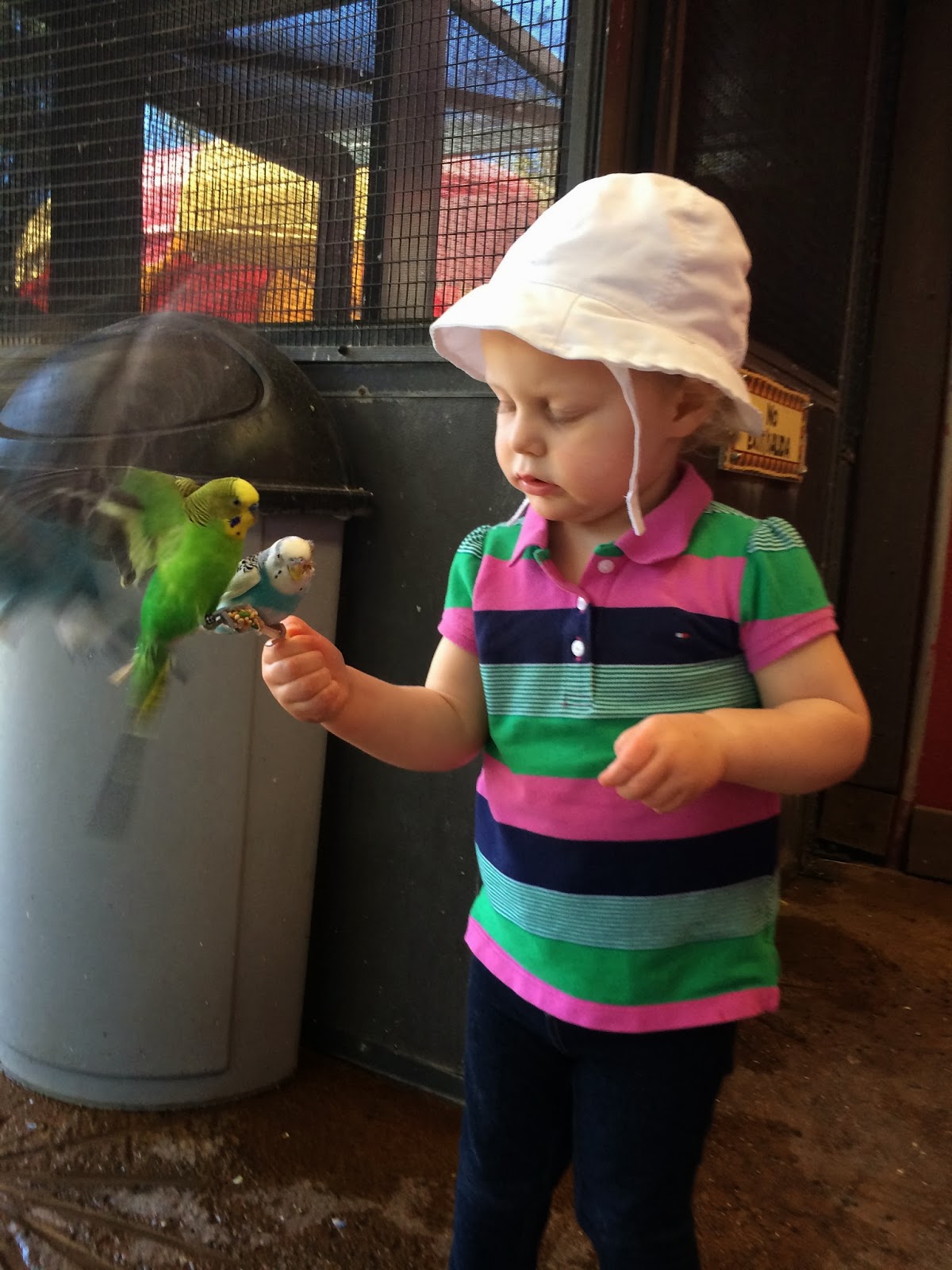 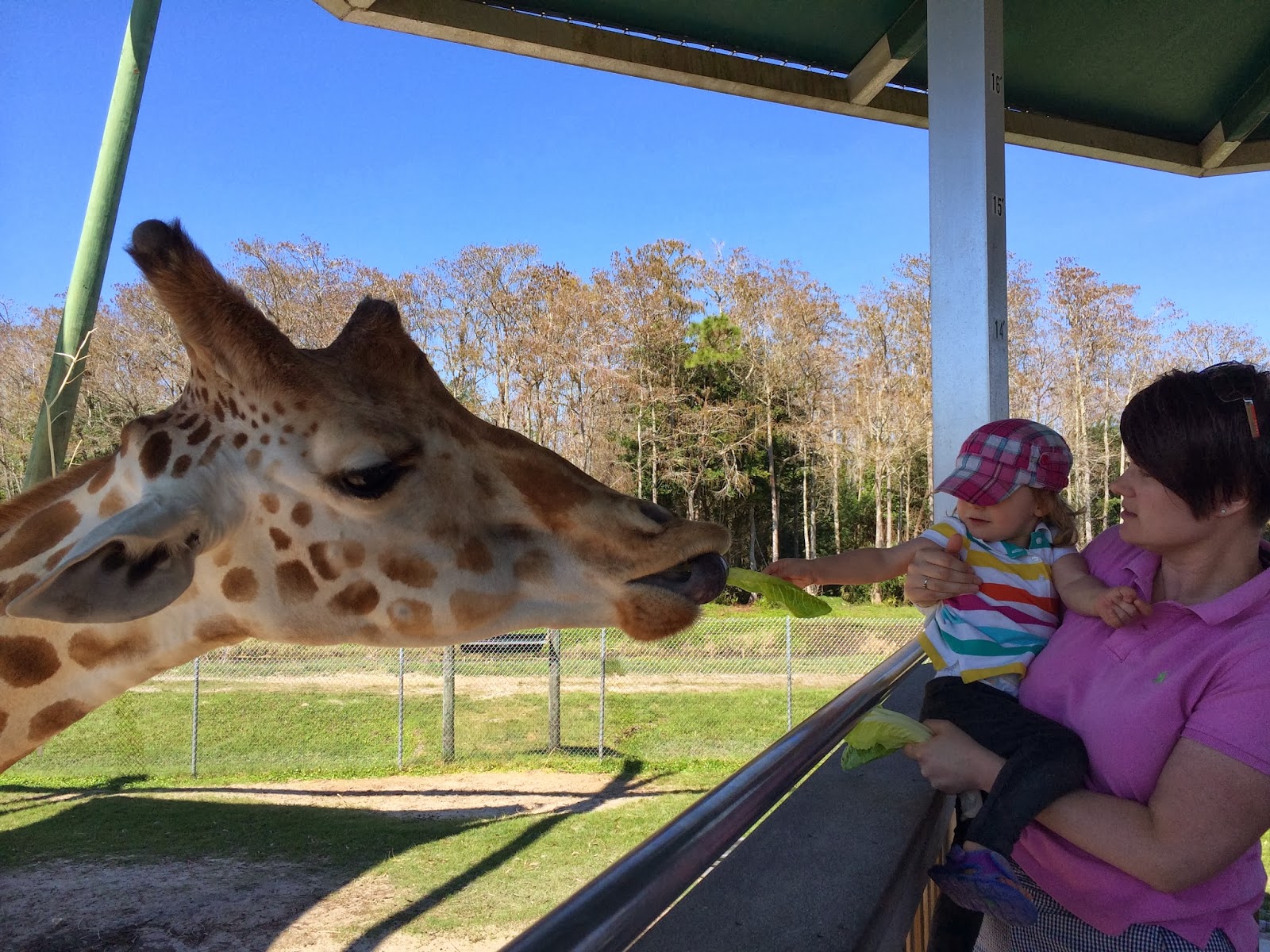 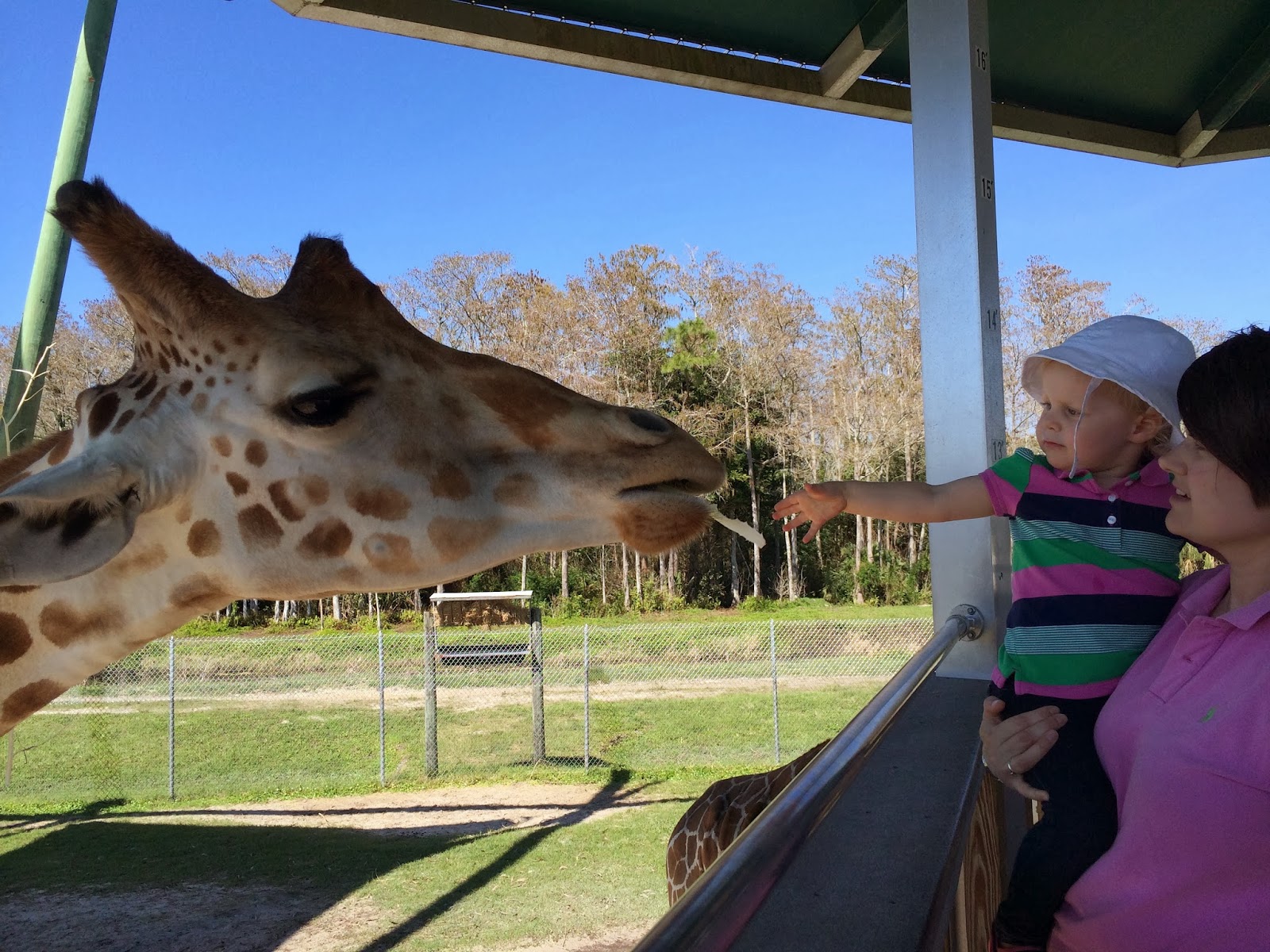 The next day, our friends and their two-year old daughter arrived from Boston for the week. We hadn't seen them since their daughter was about 5 months and the girls were 11 months! Things were definitely different. The girls warmed up to our friends and their new little buddy almost instantly. Jenn and I were both extremely proud of them for sharing their toys (without even been asked). With their new little friend being 7 months younger than them, it seemed as though they saw her as a little sister. They were very sweet and gentle.

We had a blast with them all week. It was our first time spending an extended period of time with another family. We had done vacations with friends before, but they never involved children. It couldn't have gone better. The three girls were all on the same nap, bedtime and eating schedule, so it made things much easier. Meals were effortlessly divved up and everyone did their part.

We did a one day trip to Dis.ney and visited the Magic.Kingdom. A huge shout out goes to Amanda at Little Monster(s) & Mommies. If you are ever planning a Dis.ney trip, she is the one to contact. Her rates are reasonable too (eh, Amanda?). Having been to Dis.ney many, many times, she was able to give me some insiders tips on what to do and how to do it with three toddlers in tow. We arrived in the Orlando area during the mid-afternoon. We headed to downtown Dis.ney to walk around before checking into our hotel. We all enjoyed a delicious ice cream from Ghirardelli, followed by a walk through the World of Dis.ney store, which resulted in two Min.nie Mouses being purchased. After some dinner at the hotel, we headed over to Fort Wilder.ness for the Chip.n.Dale sing-a-long and movie. Unfortunately, we didn't get our act together fast enough and didn't realize that we had to take a bus after parking (geez Amanda…step it up;) ), so we missed the sing-a-long. We still enjoyed walking around and stayed to watch a bit of the featured movie Finding Ne.mo. The girls all became cranky since it was past their 7pm bedtime so we headed back to the hotel. After a decent sleep, we got ourselves ready to hit up the Magic.Kingdom. 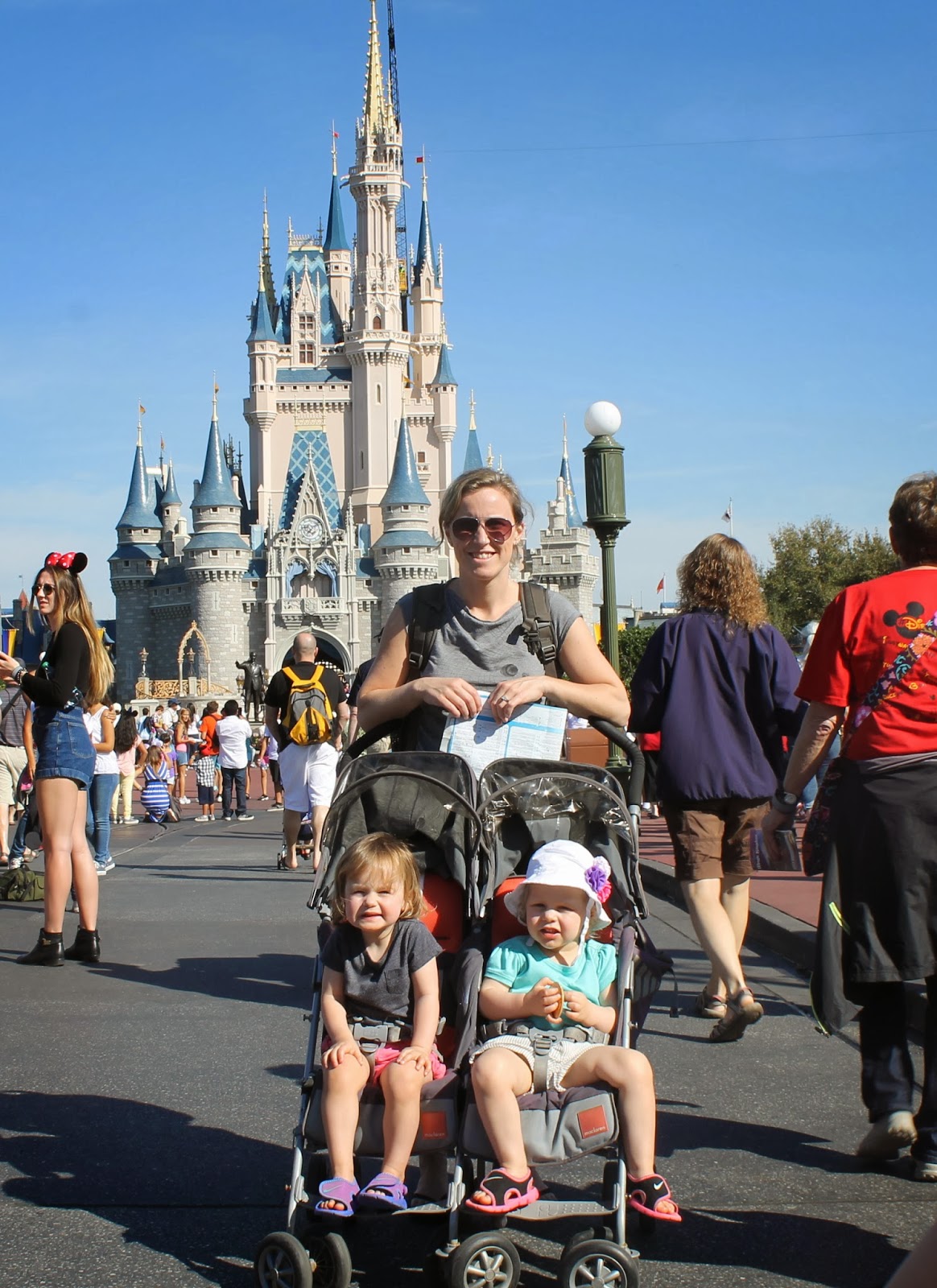 It was apparently a winter holiday for many American kids, so the park was packed. We didn't get to see and do as much as we would have liked because wait times averaged 45-60 minutes. The girls loved taking in the sites and sounds though. Quinn had a bit of a meltdown after lunch, likely due to overstimulation, which resulted in an almost two hour stroller nap. While the rest of our group took the train from one part of the park to the other, I walked with my sleeping baby.

Upon returning to the house that night, the adults were all grateful for a delicious meal and some wine, while sitting on the patio listening to the crashing waves!

With just one more day with our friends, we made the most out of it with lots of beach and pool time. 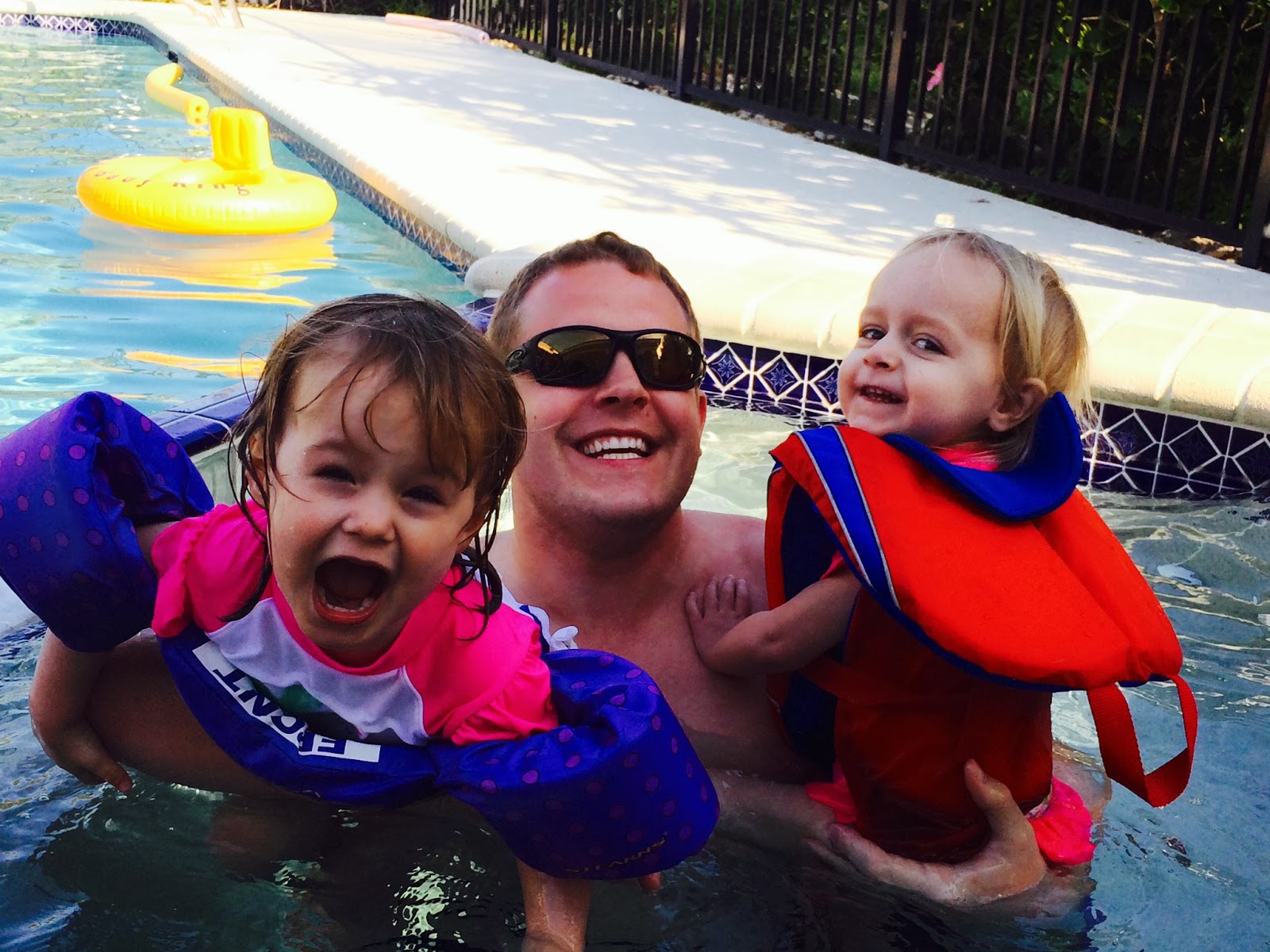 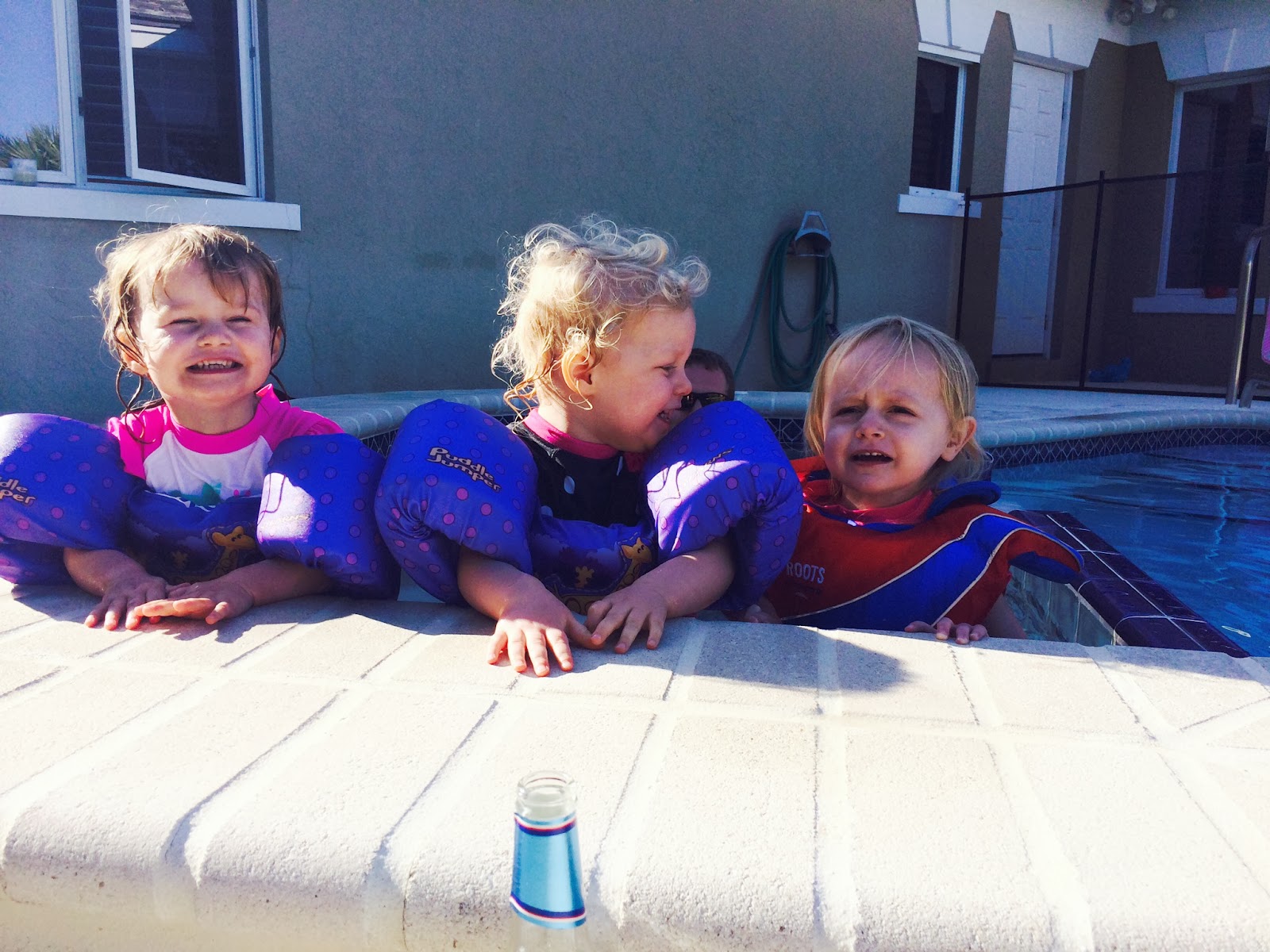 With our friends on a plane to the snowy, cold north, we spent our last day in Florida swimming and relaxing before my parents arrived for their last week of sun and warmth. 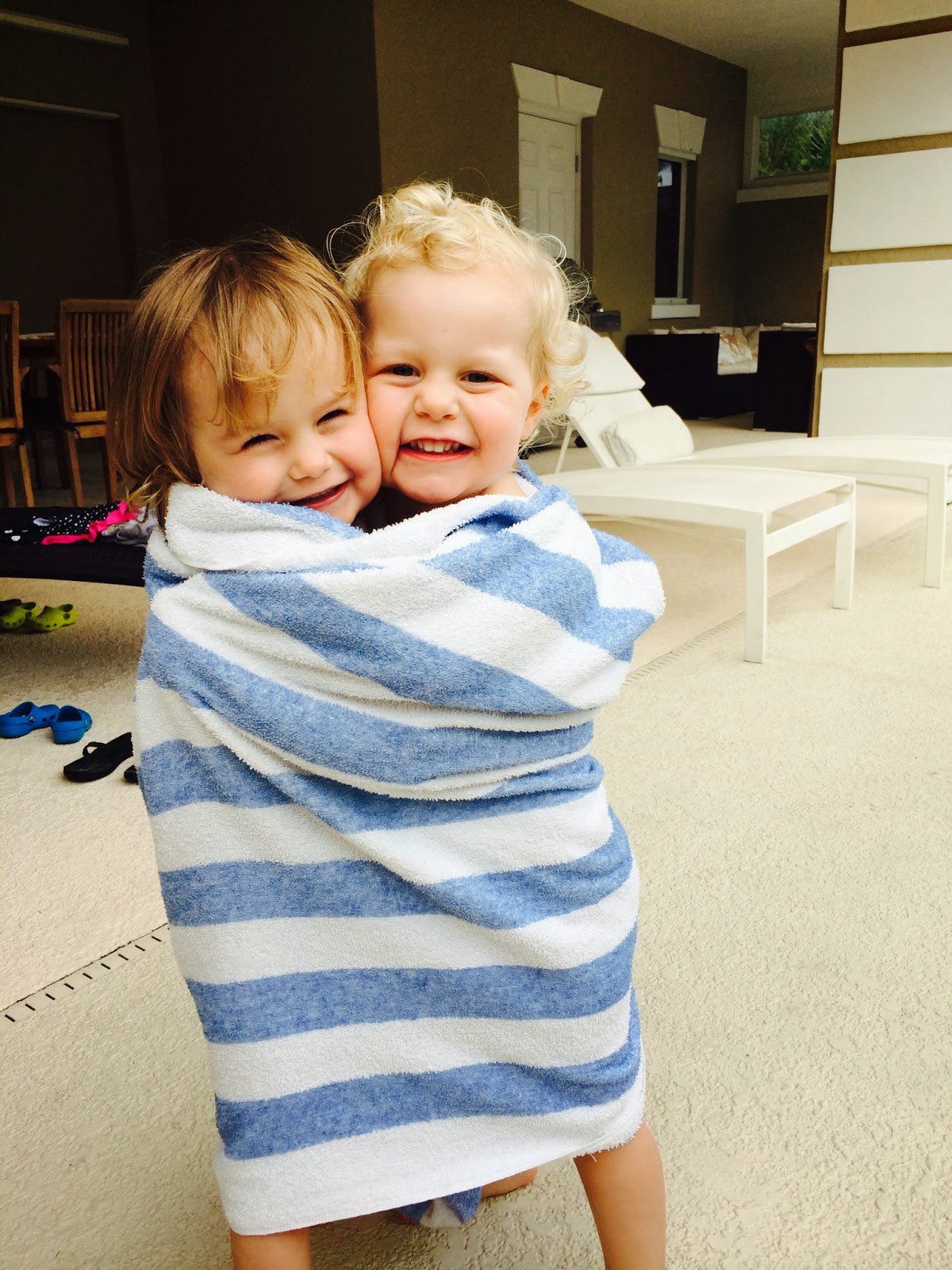 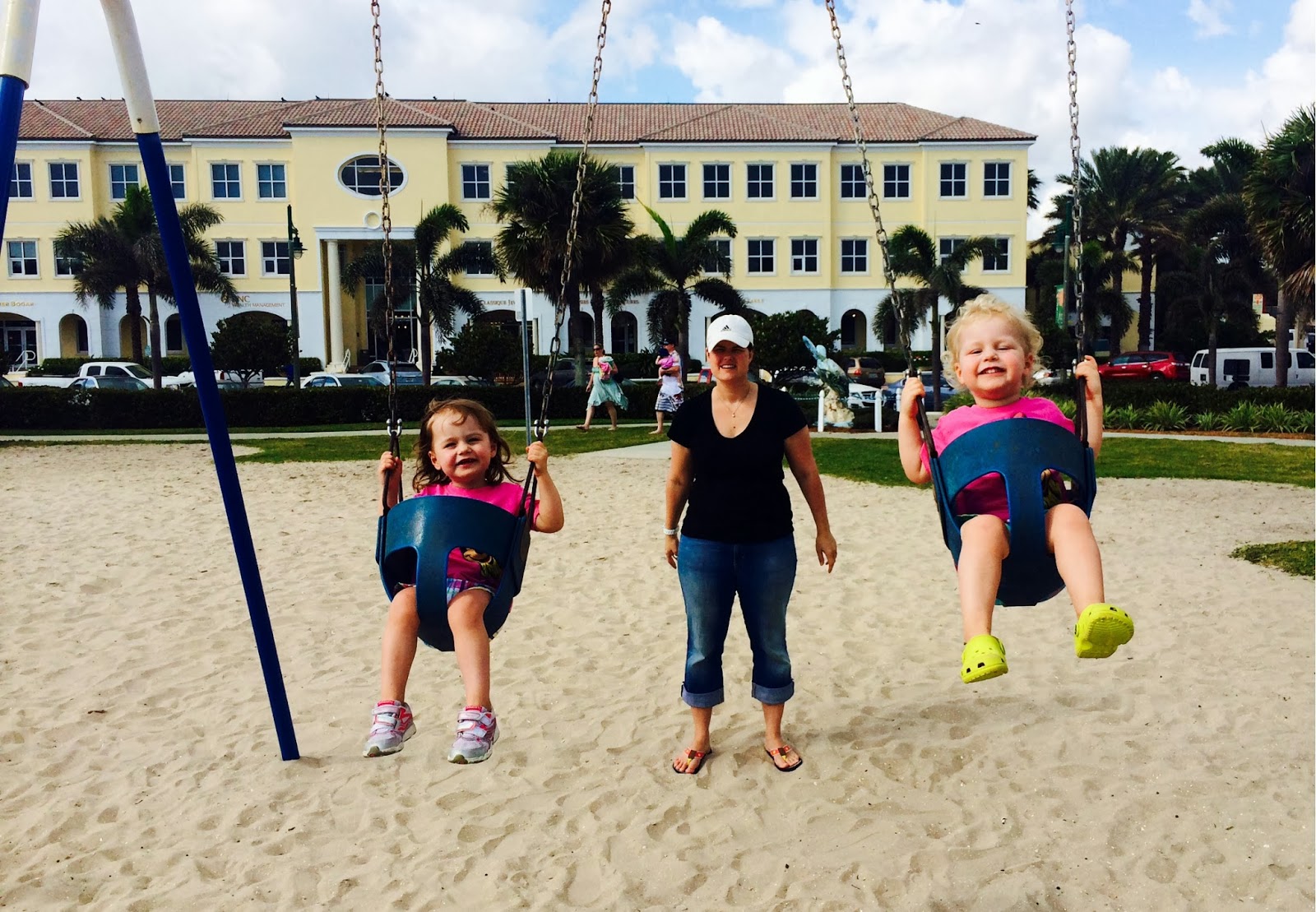 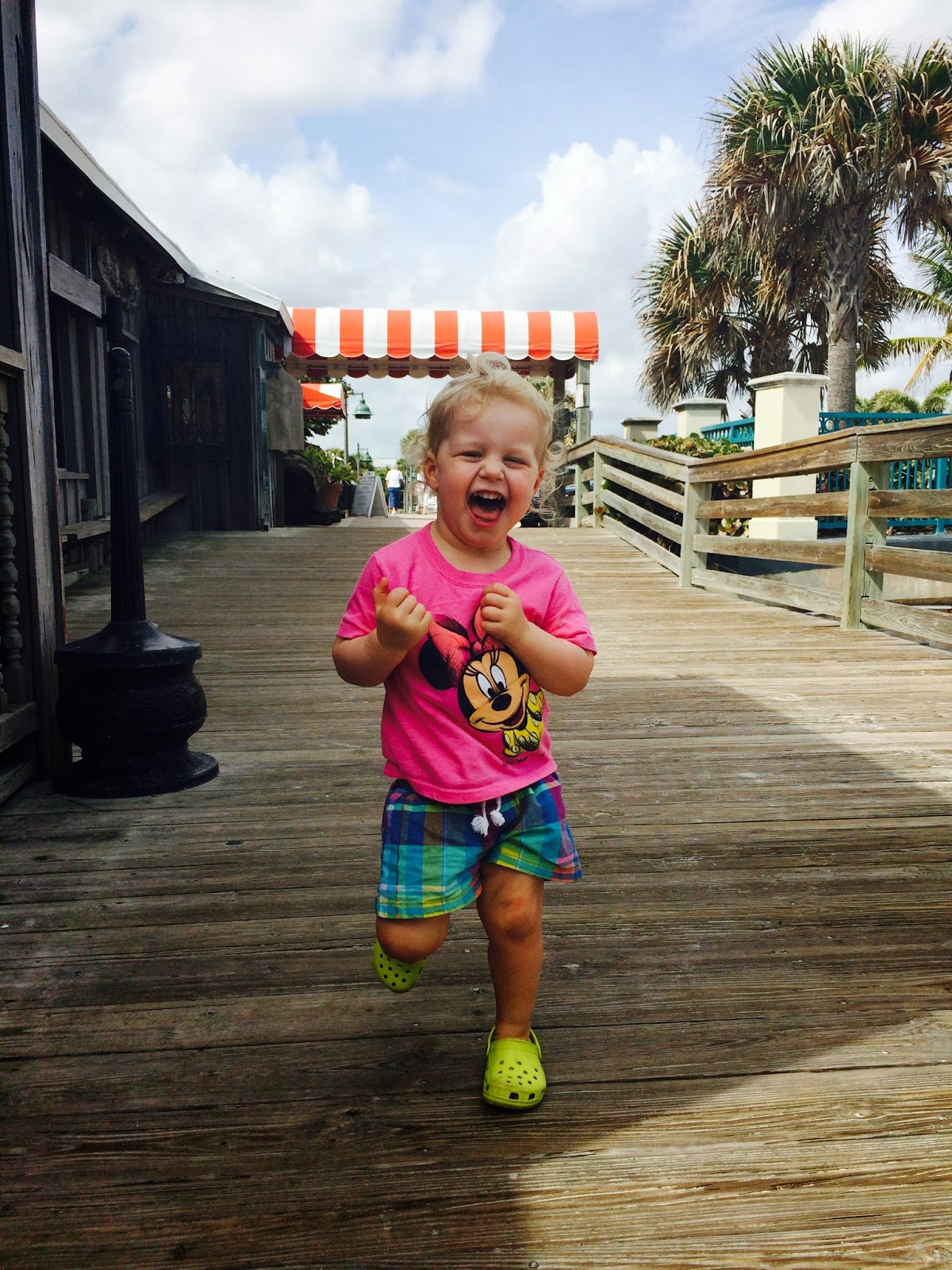 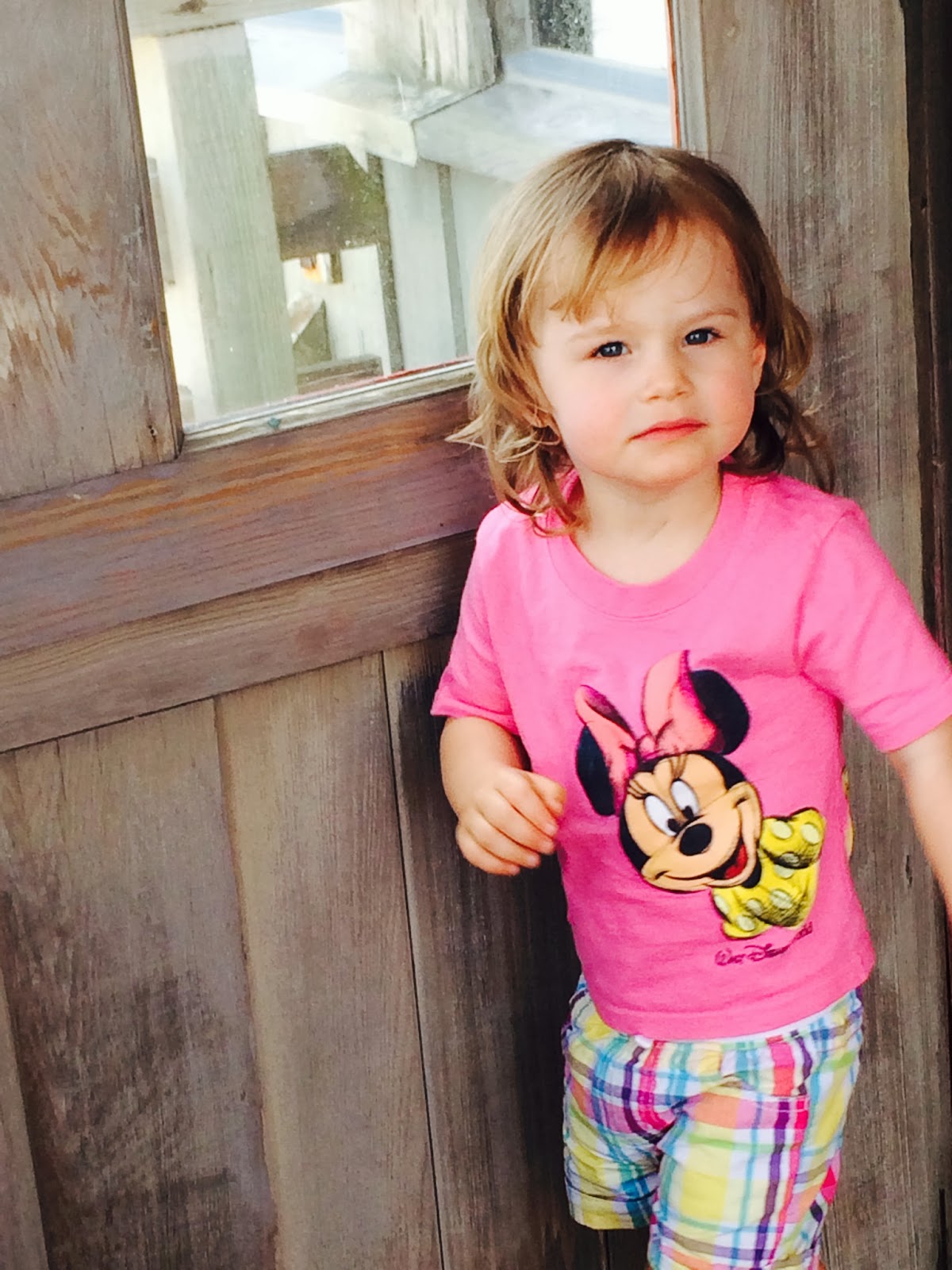 We took one last walk on the beach with my parents before heading home. We had an absolutely incredible vacation -- a perfect break from a colder-than-normal winter! We already can't wait to head back again next year :)