And so it begins!

We put our house on the market yesterday. Jenn and I ran around like chickens with our heads cut off for the weeks leading up to it, getting the house in 'show' order. We got a storage locker and loaded some stuff out. We purged. We gave stuff to Value V!llage. We sold a few items. We had the place painted and had our handyman fix a few odds and ends. We had the house cleaned. We moved stuff around and staged the house. This was the result: 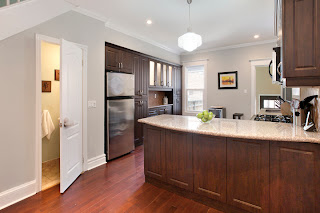 My parents (kindly) allowed the circus to come to town. Two by two by two, we piled in. Dogs barking. Small people running around. Toys everywhere. Thank you doesn't cut it! Perhaps a weekend escape at a spa?

Have you met 'Gampa', the celebrity? Quinn, especially, is obsessed with Grandpa, yelling for him constantly and patting the couch to have him sit next to her. She calls for him upon waking in the morning, usually before her eyes are even open. The girls have officially named my Mom, Atty (short for Patty, her name). They will often pick up her slippers and yell, "Atty!!" through the house. T and Atty have seriously bonded since we moved in. The girls have also taken to morning lattes and croissants from a French bakery, courtesy of my mother ;) Not surprisingly, I'm not super thrilled about my wheat-free children eating croissants, but everything in moderation! After almost two days on the market, we've had a ton of interest in the house. There were several private showings today and our agent hosted a broker's open house. Apparently the feedback was positive. Fingers crossed!
Posted by Ashleigh at 8:33 PM