Jenn and I made a deal that the first baby purchase had to be made together, when we were both ready. Well, Jenn was ready from the second I showed her the positive home pregnancy test ;) I still couldn't believe that there was life growing inside of me. I guess part of me did believe it though because unbeknownst to Jenn, I had a plan. If all went well at our first ultrasound, I was going to suggest that we make our first purchase before I dropped her at her office. After hearing about our TWO green olives (I found a site that compares the size of our growing babies to foods...green olive = 9 weeks), I pitched my idea and it was accepted. We stopped into the Children's Place in the mall under Jenn's office. After looking around, it was obvious that they had virtually no unisex clothes. We ended up finding these adorable yellow onsies with monkeys on them (see below). Even though they are 0-3months, the babies will probably not even fit into them right away, given that twins are usually born smaller than singletons. 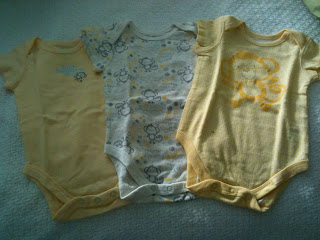