Teagan and Quinn officially graduated from the midwives care today (and so did I!). As I've said in previous posts, our midwives (and midwives in general) are amazing. I am so grateful that the clinic took us on despite the twin factor. They made my pregnancy and the twins' birth a very positive and memorable experience for Jenn and me. A first pregnancy is always somewhat nerve-wracking. Our midwives, Sarah and Christie, had this amazing way of putting me at ease by simplifying my worries, so that they were worries no longer. If you're pregnant or thinking about getting pregnant, I would strongly suggest going with a midwife. If you're in Toronto, go with The Midwives Clinic!

Here's a picture of our midwife Christie and I with the babies: 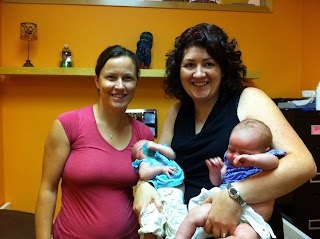