Last weekend, the girls participated in a kids' triathlon, Nicola's Tri for Kids. It was set up in memory of a 3-year old girl who died of myelodysplasia (bone marrow failure).

Jenn had a work commitment, so my friend Cheryl helped me out. The girls ended up having a blast and so did we! They set it up like the real deal, not that I've see it first hand! We had to leave the bikes at a drop off point and then circle back to park the car. We then grabbed the bikes and walked them over to the transition area (ie. the area where you make the switch from swim to bike and then bike to run).

We then checked out the bouncy castles and the silent auction. The girls were being unusually timid and didn't want to go on the bouncy castle alone. Good ol' Cheryl, at 5-months pregnant, climbed through that thing with her like it was nobody's business. Yes, I know. Why did I let the poor pregnant lady climb through the bouncy obstacle course while I kicked my feet up on the grass?

Cheryl is like an awesome big kid. And in fairness, they wanted her and not me!

It was finally our turn to be called into the holding area for the swim. The girls were number 65 and 66, so it took a little while for our turn since they started at 1 and called only 14 kids at a time. The girls were getting antsy, so we tried our best to keep them distracted. They finally received their ankle band with the chip and were ready to swim (seriously, this was the real deal!) We decided that it was easier for me to go in the pool with both kids and Cheryl would wait at the end with our shoes and bag.

The horn went off and the girls jumped in. It was a combo of them kicking and me pulling for the length of the pool. We put their shoes on quickly and ran into the transition area to jump on the bikes. As Cheryl wisely pointed out, next year, we need to put the bikes at the very end so we don't have to navigate through all the people with our bikes.

It was during the bike portion that I noticed the loud "encouragement" by other parents for their kids. I thought that I was competitive. I also naively thought that a triathlon for 3-5 year olds would just be for fun! These parents ran next to their kids yelling, "COME ON ___!!!", while clapping their hands ferociously. It was quite amusing. It was even more amusing when their kid would slow down or not feel like peddling.

Quinn was slightly ahead of Teagan, but took a tumble on the bike turn around. The kid didn't even flinch and jumped right back on. We got back to the transition area, quickly dropped off the bikes and started running. Q ran over the finish line and was met by a volunteer who immediately put a medal around her neck. We turned around to see Cheryl and T crossing the finish line with arms in the air!

Naturally, the medals were the best part. The entire thing took a total of 15 minutes. While the girls were reluctant at first, likely because it was something new, they embraced the challenge and had a ton of fun. They will definitely compete again next year! 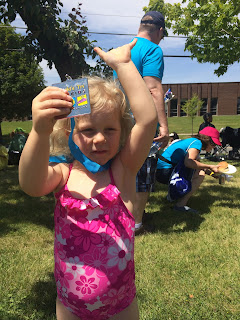 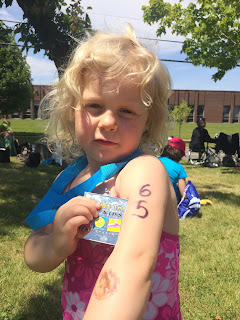 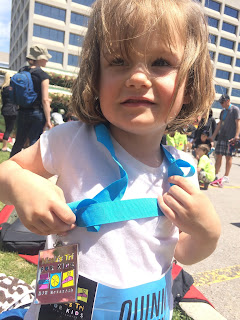