Happy 4th birthday to our oldest, Riley! Almost four years ago, Jenn and I walked into Pik-a-Pup near Boston, on a Sunday morning with no intention of coming home with a puppy. But, when I walked into one of the rooms and saw four 8-week old Wheaten Terriers in a big pen, my heart melted. One of those little Wheaties came right up to the glass and reached his little front paws up to me. He then followed me back and forth as I went to say hello to all of the others. He was a persistent little guy though. We went back home shortly after that but I couldn't think about anything else. Sitting on the couch, Jenn looked at me and said, "you're thinking about the puppy, aren't you?" We went back there so I could "just hold the puppy." He had already won me over so I shoved him into Jenn's arms. The adorable little teddy bear quickly won her over as well. We got a dog that day :)

As a present to Riley, we took Finn to the vet to be neutered :) Just kidding...the gift part, not the neuter part. Finn needed to get the "big snip," as my Dad calls it, very soon anyways. Riley and I spent the day together, just the two of us, like the old days! We went to the Whole Foods Cafe so he sit next to me and flirt with all of the passers-by. Riley then put on his therapy dog hat so we could visit my Nana. He was on his best behaviour, sitting next to her while she pet him. The weather warmed up slightly so I let him hang his head out the window for the entire ride home (his favourite).

Here's the first picture that we ever took of Riley at 8-weeks old: 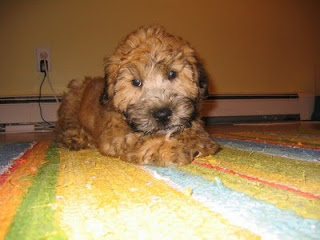 HAPPY BIRTHDAY to my sweet boy!
Posted by Ashleigh at 8:23 PM