The Surprise Shower (for Jenn)!

About a month ago, I was contacted by one of Jenn's friends at her company. She said that her group at work would like to throw Jenn a surprise(!) baby shower and asked if I would mind coming in for it. I was thrilled by the idea and knew that Jenn would love it too!

Earlier in the week, I went down to her office for the shower. I had this feeling that she might know that something was going on. I hate to keep secrets from her, but I knew that the surprise would be well worth it. I arrived 15 minutes early and so did everyone else. We all piled into a conference room, which filled up quickly. Looking around the room, I was incredibly touched by the number of Jenn's coworkers who took time out of their day to celebrate our two new arrivals.

A coworker had planned a "meeting" on Jenn's schedule, which he then turned into "going for coffee." They were going to take a quick walk to meet someone else before heading down to grab coffee. Jenn works on the 23rd floor, so you'd think that meeting someone on the 30th floor in a conference room might have tipped her off....nope. She walked in the room, turned bright red and had a huge smile on her face. The surprise had worked! The group gave us some toys to hang on the girls' car seats and an incredibly generous gift card which will go towards buying the car seats!  We enjoyed some cake and chatted with her coworkers before everyone went back to their day.

Thank you to all of Jenn's friends and coworkers for a wonderful shower! Jenn and I were both very touched by your kindness and generosity. The babies will definitely be making a visit to the her office in the summer! 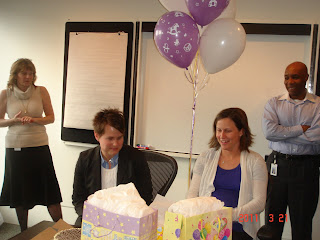