9 Months Old! The girls have officially been outside babies longer than they were inside babies. For me, this is a huge milestone. I was and still am proud of the fact that I carried the girls to 38 weeks. As tough as those last few weeks were, it was all worth it to give birth to two happy and healthy babies. 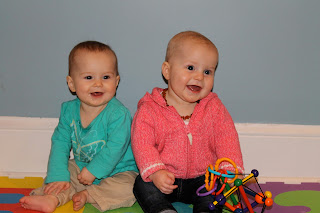