I realized yesterday that I never posted Halloween pictures! While shopping in early October, Quinn spotted her Halloween costume from across the store. I didn't even know the store sold Halloween costumes! She saw it and instantly loved it. She has worn the costume every day since…

Knowing that I couldn't arrive home without a costume for Teagan, I picked up a veterinarian costume. It was adorable - blue scrubs with puppy paws all over it. It included a stethoscope and a little hat. The kid adores animals and is the baby dog whisperer. I thought it was perfect. I was wrong. She freaked out and demanded a monkey of her own.

By the time I returned to the store the next day, the monkeys were gone. I did manage to get her an adorable tiger. And this is where "Monkey Tiger", as Quinn called it, began. 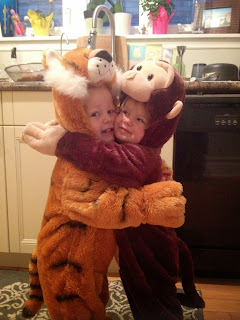 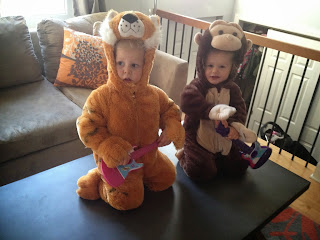 We took them to a Halloween party on the weekend before the big day. Despite the rain, we did take them out for a stroll around the neighbourhood on the 31st. They didn't understand the candy thing and I wasn't going to encourage it. It didn't matter though. They had a blast running through the rain taking in all of the lights and sounds of Halloween.