Following on the heels of my previous post about the girls' first taste of Smarties, I now write about our first trip to the dentist!

Today's visit was technically Quinn's second trip to a dentist. I took her two weeks ago over fear that she might have damaged her teeth on one of her many tumbles. My dentist took an xray which fortunately showed no damage to her teeth. He recommended that they see a paediatric dentist for the cleanings for the first few years. So off we went to a paediatric dentistry practice recommended by a few friends of mine.

While waiting in the the toy-filled waiting room that is also fully equipped with TVs and a Wii, a little girl who was about 4 came out of her appointment crying her eyes out. Quinn sat on my lap with her eyes glued to the crying girl. The dentist came out and gave her some ice for her mouth, so she had obviously had something more done than a standard cleaning. Quinn continued to watch intently clearly growing worried that the tears were in her future too. Nothing gets by her. She is always thinking. I tried to distract her with toys and random conversation without success. I finally told her that the little girl was having a hard day. We talked about how she too, has hard days. As we talked about it a bit more, she seemed to become less worried.

Eventually, it was our turn. We were introduced to the dental hygienist, who was extremely friendly. She asked who wanted to go first. Given Quinn's nervousness about anything new, I encouraged Teagan to go first. She hopped up on the chair with ease. The hygienist let her pick a pair of sunglasses and as the chair was slowly lowered, Teagan looked up to see this… 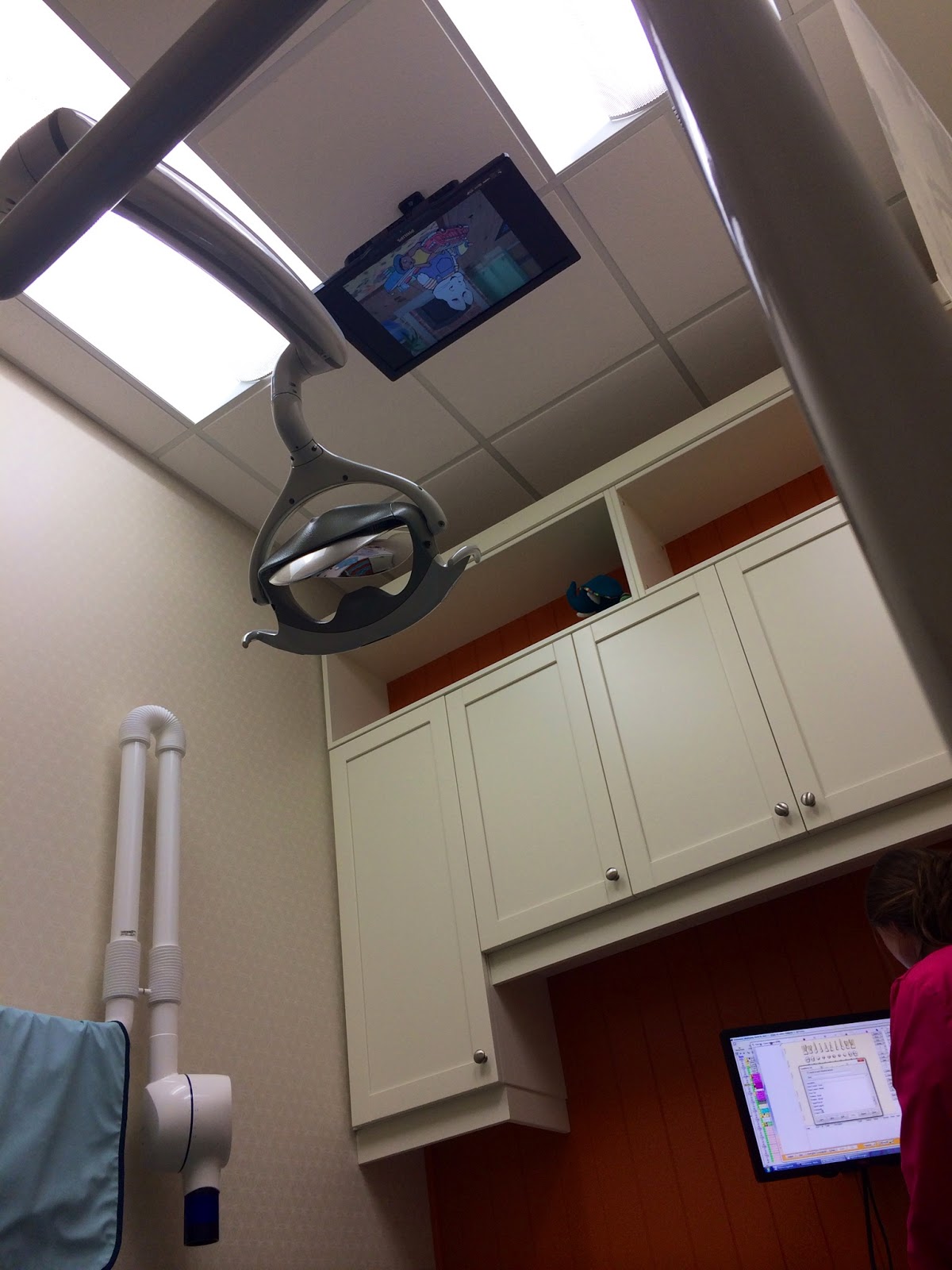 They've pulled out all the stops at this dental office!

I was told that at this age, they count teeth, introduce the kids to the dental tools and do a cleaning, if the child lets them. Teagan was a champ. She willingly opened her mouth for the hygienist, who easily counted teeth - she has all but one of her 2-year molars! Fortunately, she had virtually no plaque so the scaling was minimal. She cleaned her teeth and then allowed a happy T to pick out a sticker.

Just like with the little girl in the waiting room, Quinn watched Teagan intently, knowing that her turn was coming. Luckily, Teagan handled her cleaning with ease.

I reassured Quinn throughout Teagan's cleaning and showed her all of the cool things in the room. I even allowed her to snap pictures of Teagan on my phone. A budding photographer!

Quinn reluctantly got into the chair clutching my hand. I sat next to her pointing out the random characters on the ceiling TV and reminding her that she got to pick out a sticker when she finished. She opened her mouth while the hygienist counted her teeth. She too, did extremely well during her cleaning. The hygienist frequently had to stop because Quinn was fascinated by the tools and wanted to inspect them all. 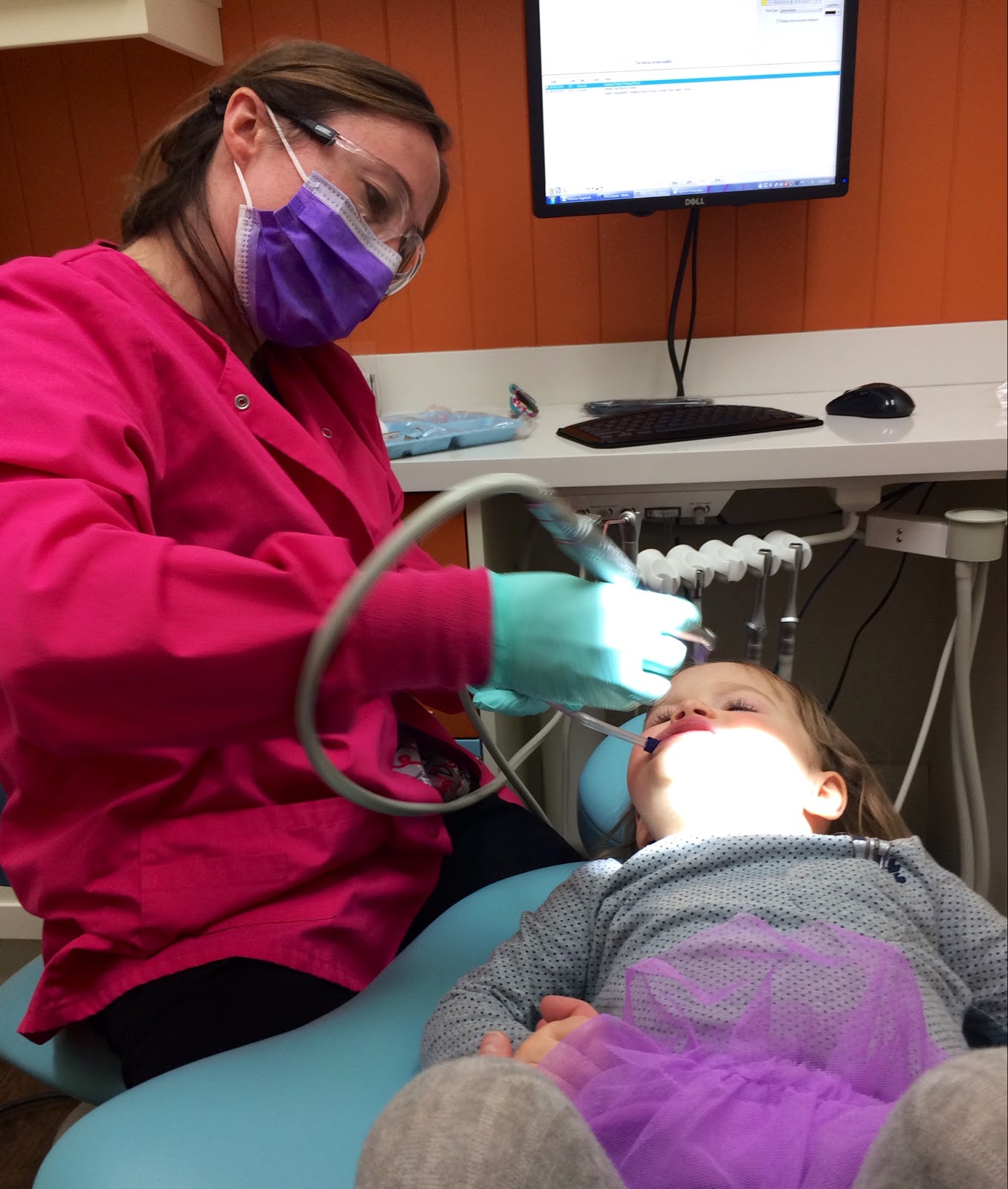 The hygienist praised them multiple times for being so great. I couldn't have been more proud of my girls for taking their first dental appointment so well!
Posted by Ashleigh at 9:42 PM