Please excuse the pee stick picture. I know that some think it's gross! When you want to see two lines, this is truly the greatest sight ever! (This is NOT public knowledge so no Face.book shootouts!!)

I haven't been vocal about our plans for #3 on the blog, so I know that it might come as a shock to some. I can actually remember thinking that I wanted another child, as far back as when I was pregnant with the girls. Jenn has ummm had, always been dead set on two kids. We just happened to get two at once. I just knew that I was going to want to experience pregnancy, birth and the baby stage a second time. It took nearly four years of convincing, but I finally did! Jenn agreed to a third! What I absolutely love about Jenn is that once she commits to something, she is 100% in. From the second she agreed, she became excited (and yes, a bit nervous, but hey, so am I!).

This happened at the end of February.

As it turned out, our (anonymous) donor left the program in late 2011. There were/are still vials left, but they are all in the US. We had to purchase three vials from the US and wait for 6-12 weeks for them to go through a testing process with Health Canada. One vials was "wasted" in the testing process, so we were left with two tries. The fertility clinic that we previously went to doesn't take clients who have to go through this process because the paperwork is quite extensive. We switched clinics and had our initial appointment in mid-March. The approval from Health Canada came through and we were able to do our first IUI on May 3rd. This one resulted in a big fat negative. The first cycle was much harder on me emotionally than I thought it would be. I'm a worrier by nature. I have a feeling that the IUI was timed too early. I don't really have any proof of this, just an intuitive wondering. Anyone who has gone through this process knows the disappointment that you feel when you see that negative pregnancy test. Fortunately, my period arrived right on schedule and we were into the next cycle. I was much calmer and less anxious.

The doctor took a closer look at my cycle for this try. I'm glad he did because he caught the LH surge (ie. the hormone surge that happens 24-48 hours before ovulation) happening much earlier than it ever has for me. My cycles are normally like clockwork. 27 days. Ovulation on day 13 or 14. He caught the levels rising on day 9 and the surge on 10. The IUI ended up being on day 11. I was convinced that it was too early, but decided to let it go and trust the professional!

I didn't feel much for the days after the IUI. I tried not to look for signs that the little bean had decided to get comfy and stick around. It was around day 8 post IUI that I started to feel a little off. Jenn had been feeling a little under the weather so I thought that maybe I was coming down with something too. On day 9 and 10, I felt mildly nauseous, yet I was still hungry for meals. That's when the lightbulb turned on. I was out on Saturday afternoon and decided to buy a test. I came home and quietly took it. Positive! Jenn was out in the backyard. I quickly called the girls into our room and begged them to put these t-shirts on to show Mama: 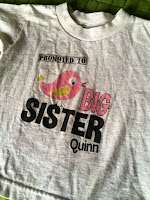 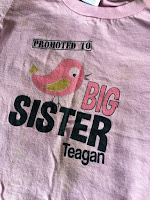 (Yes, I ordered them ahead of time. I was putting the intention out there!) They reluctantly wore them for me (after a gelato bribe!). I followed them outside to see Jenn's reaction! It took a moment to register, but when it did, a HUGE smile filled her face. Even though we were waiting for this, it felt completely surreal. I think it always does! The girls don't have a clue what the t-shirts say. They call them their birdie shirts! They won't be told for a while.

We are beyond excited and a little nervous too. Our girls are going to be the most incredible big sisters. While at my cousin's son's first birthday party on the weekend, I watched the girls interact with him. At one point, the three of them were on the floor together. He started to cry. Teagan immediately started rubbing his back and then gave him kisses on his head.

Teagan has always been an intuitive kid. About one week after the IUI, she told someone very matter-of-factly, "we are having a baby!" I immediately turned and shook my head no! The day after I found out that I was pregnant, she got into bed with me and said, "Mommy, I wish there was a baby in your tummy." We have not said a word about any of this to the girls. They are incapable of keeping secrets! They will know when we are comfortable making it public knowledge.

I know what you're thinking…twin boys! While my body seems to ovulate two eggs frequently, there was only one very dominant follicle for this cycle. For the previous cycle, I'm actually pretty sure that I was going to ovulate two. Perhaps that negative test was God's way of saying, NOPE! We will know for sure who is in there on June 30th when I go in for an ultrasound. I will be 7 weeks. I'm currently 5 weeks. I would love to experience a pregnancy with "only" one.

At this point, symptoms are minimal. For the last week, I've been able to feel the my uterus and ligaments stretching. I'm assuming that it started early since my body knew what to do. I'm a little bit tired, but I'm also running around with two 4-year olds all day, so I think that's mostly the cause!

Hmm…so is a new blog name in order? #3 needs a clever nickname…stay tuned!
Posted by Ashleigh at 3:22 PM