Camp Fun and Tales from a Lime

As I mentioned in a previous post, the girls are in camp for the mornings for the first part of the summer. They spent the first three weeks of the summer at the same camp that I went to as a child. To say that they loved it is an understatement. I've never seen them so happy to go to any camp/school/activity. They couldn't wait for the bus to come each morning. They would happily jump on. Apparently, the bus ride to camp was filled with songs and cheers. They had a swimming lesson each day (amazing!) and from what I read on the report, it sounds like they really improved. Teagan, especially, loved being in the water each day. They both passed their badge and will move onto the next level when they start lessons again in the fall.

Besides the typical day camp activities, the girls got to jump on the trampoline, play with live exotic animals, watch magic shows and participate in an interactive music program. They came home midday with the best stories and huge smiles on their faces.

While they were sad to see this camp end, they were excited to start animal camp again. They've been doing classes and camps at this place for a couple years now. They love the staff and the animals. On the first day, Teagan was reluctant to go in, but fortunately, one of the staff who they know well (and also ran their 3rd birthday party) showed up at the perfect time and whisked them away!

Unfortunately, I don't have any pictures of either camp. They usually prefer that parents make themselves scarce once the kids are settled. I did, however, get a picture of the kangaroo who was visiting on their last day! He was camera shy and I was on the other side of the door! 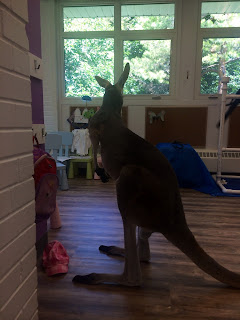 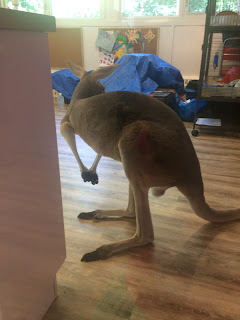 This week, they are in a music camp. Lucky for them, spending a few hours each morning isn't such a bad thing because Toronto is currently in a heatwave. Temperatures have been hovering around 34/35 degrees Celsius (around 95F). Spending time outside is only bearable if we're by water.

Apparently, our third little monkey wants to give the first trimester a most dramatic send off. I've been feeling pretty awful for a few days. The exhaustion is bad, but it is made worse by the fact that I'm not sleeping well. My saving grace is the fact that the nausea is intermittent and minimal. I'm trying hard not to complain, but compared to many, I have it easy.

At 11 weeks, the monkey is the size of a lime. This week's update on baby gave me a good laugh...

Your fetus currently enjoys a 1:1 ratio between body and head, and has skin so transparent that blood vessels show right through it. But fingers and toes are no longer webbed, and hair follicles, tooth buds, and nail beds are forming -- setting up a significantly more attractive future. 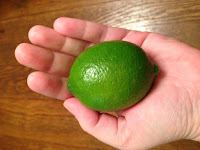 I'm glad the monkey is being set up for a more attractive future.

Our NT scan has been canceled and reschedule three times now. Apparently, the clinics don't look to see if there is a tech who can perform the ultrasound when they book it. It is now scheduled for this coming Friday, so a few days earlier than planned, but it can be done as early as 11 weeks, so I should be ok.

If all goes well, we will be telling the girls after this ultrasound. Honestly, I can't wait. Teagan told me the other day, "Mommy, I would be SO HAPPY if you had a baby in your tummy!" The kid also told someone that we were having a baby 3 days before I even took a pregnancy test. She's intuitive! She also told me twice in a 24 hour period recently, "Mommy, your tummy is so big!" Tell it like it is, TT!