Weddings, Pride, Summer and Tales from a Blueberry

Two weekends ago, I was a bridesmaid in the wedding of my good friend Kate from Boston. Jenn and I jumped in the car early on Friday morning to drive down to Lenox, MA. The girls stayed with my parents. Lenox, for those who haven't been, is an adorable picturesque little town in the Berkshires.

We got down there, had a quick nap and then jumped into the wedding festivities. Post rehearsal and dinner, they invited all of the wedding guests to a movie night. They projected Despicable Me, their second date movie, onto the side of the barn. 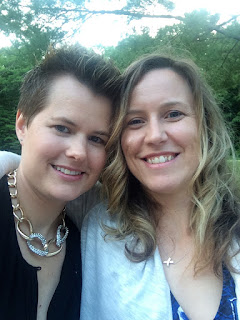 The wedding itself was gorgeous, straight out of Pint.erest! The setting was stunning as well. The wedding was held in the barn, while both sides of their families stayed on the property in two houses. 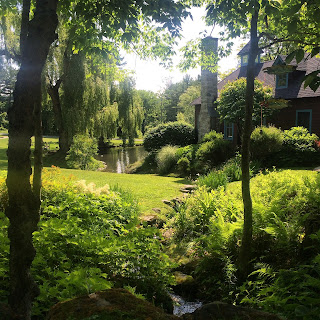 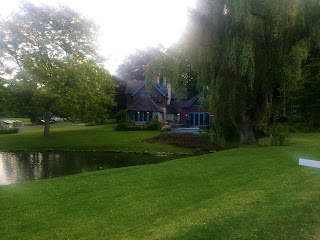 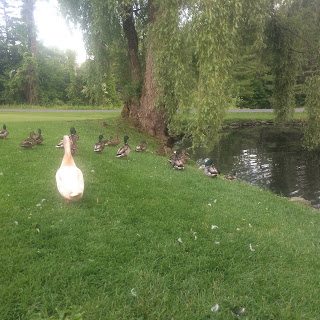 We had a fantastic day getting ready and relaxing (sort of) with one of the beautiful brides!

Once the night got underway, all nerves were gone, and everyone had a blast.


It was Pride in Toronto this past weekend. Sadly, for the first time in over 10 years, it rained. ALL. WEEKEND. Ok, that's a lie, we did get down to Family Pride with the kids for about 1.5 hours before the rain set in.

Jenn and I did book a babysitter for a few hours in the afternoon/evening so that we could go back down there. After hours of rain, that wasn't going to quit, we decided to skip Pride and see a movie instead. We then met up with some friends for a fantastic Thai dinner before heading home early for my pregnancy-induced 8:30pm bedtime. 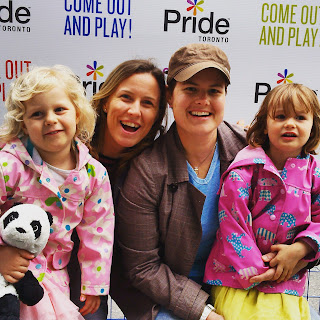 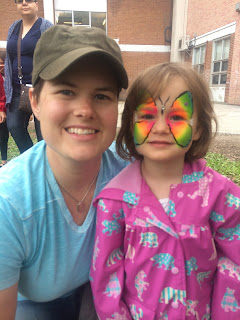 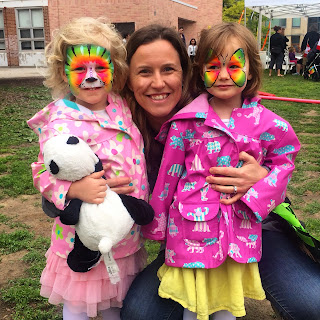 Summer vacation officially started last Thursday for Toronto kids. I learned from my mistakes of last summer and signed the girls up for some half-day camps. I found it challenging and exhausting to entertain them for 12 hours a day for 10 weeks straight last summer. I like the balance of this summer. Some camp. Some free time. Some cottage time. Everyone is happy!

The girls started camp on Tuesday -- the same camp that Rob, Michael and I went to as kids! A bus picks them up in the morning and then I pick them up at 1pm.  I am already in love with this camp. To prepare the little ones, they send the buses around two weeks before camp starts. The kids get to meet the bus counsellors, jump on the bus and receive their backpacks and t-shirts. They also did a family night last week, so the kids could meet their day camp counsellors and try out some of the activities that they would be doing. This is the kind of preparation that really helps my kids who are quite nervous in new situations. On the first morning, two bus counsellors jumped off the bus immediately, came over to T&Q and bent down to say hello and ask for a high five. I could have hugged them. They were friendly, but not pushy -- it was perfect.

They were hot messes from the second they got in the car on Tuesday, likely from being tired, overstimulated and overwhelmed from day one of camp. They yelled (at me and each other) and cried for the entire ride home. Thankfully, yesterday was better!

We went down to see a friend of mine perform yesterday in a Canada Day festival. She sings in a rock choir. We got down there early and actually managed to snag two front row seats when two people got up and left. Teagan was mesmerized by the Polish and Armenian dance-folk groups who performed before the choir went on. The girls were troopers considering we took them down there straight from a long morning at camp. The choir was fantastic, with a rendition of Journ.ey's Don't Stop.Believin' being my favourite. 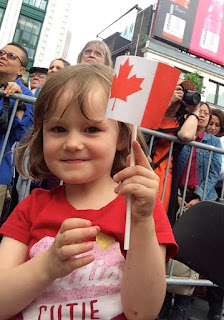 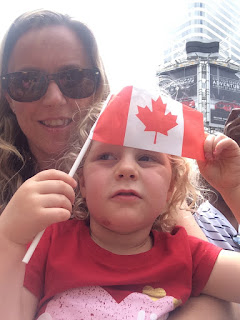 And last but not least, we had an ultrasound earlier in the week. The little blueberry is measuring right on track and had a good heart rate of 123. We will be going back for one last ultrasound in 2 weeks when I will be 9 weeks pregnant. At that point, we will officially out of the clinic's care!

Fatigue hit with a vengeance late last week. Despite sleeping 8-9 hours per night, I'm exhausted. I'm grateful for camp and my 8:30pm bedtime!
Posted by Ashleigh at 11:23 AM