There are no secret snacks

No, Mommy. We have to get one for Quinn.

I was out running errands with Teagan yesterday. I grabbed myself a protein bar and asked Teagan if she would like a bar too. She said yes, but in the same breath said that Quinn would like the apple cinnamon one. I told her that we didn't need to get one for Quinn this time since she would be eating it in the car. She would hear nothing of it.

This happens anytime I'm out with one of them. They usually request a small snack and I usually oblige. If we're in the grocery store, they ask for a pouch (those fruit and veggie baby pouches). I let them choose one. Two pouches are always picked up, with one proudly brought home for the other.

My girls fight like crazy at home. They yell, hit and push each other. Part of me gets it. I have brothers. We fought too. Sibling rivalry is normal. But, as a twin when you're young, you spend every waking second together. I can't imagine, but I'm also not a twin. I guess that this is where the twin bond comes from. They don't know any different.

A week ago, the girls had been fighting for hours. I tried and failed to separate them. I finally said to the them, Why don't I find you each a camp so that you can have some time away from each other?!! This was met with a very quick and emphatic, "NO!" Quinn then told me, Mommy, we never fight at school or at camp! And that's just it. These two are thick as thieves. I feel so privileged to be able to watch their bond develop right before my eyes.

When Teagan is nervous to try something new, Quinn takes her hand and shows her the way.

When Quinn is feeling too shy to ask someone a question, Teagan takes her hand and asks for her.

When the camp bus pulled up on the first day, they nervously sat together on their first bus ride.

When Teagan is crying hysterically because I'm going out for dinner, Quinn takes care of her, feeding her dinner and helping her into her PJs (yes, a babysitter is present!).

When I get upset with Quinn for colouring all over the couch with marker, Teagan is the first to grab a cloth and start cleaning.

On a good day, they will disappear for hours into their imaginary world, creating the most spectacular stories.

Yet, despite all of this, we can go to the park and they will go their separate ways. Quinn will head off to play with her best friend while Teagan grabs a shovel and some trucks and happily plays independently in the sandbox. They have their own friends at preschool and can be in separate groups or sit across the circle from one another without issue. I love this about their dynamic. They can shift between playing separately and together seamlessly. 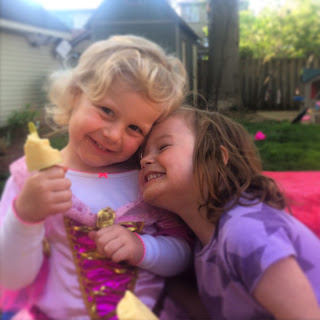