Staring at a screen with my baby's name and "In the OR" next to it for two and a half hours was one of the most emotionally difficult things that I've ever been through. Even harder than that was passing my baby over to a nurse and watching him walk into the OR.

As I briefly mentioned in a previous post, Logan had surgery at Sick Kids last week. Thank God for the reputation of the hospital and the surgeon who operated on Logan. He truly is one of the best in his field. Every parent hopes to never set foot in a children's hospital, but since we had to, I'm incredibly grateful to have Sick Kids down the road.

Before I go on, the surgery went perfectly and Logan is doing as well as can be expected.

Shortly after birth, our midwife noticed that Logan had hypospadias. The hole of his pen*s wasn't in the correct spot and his urethra wasn't straight. He was peeing normally and otherwise fine, so there was no immediate action to be taken. While he could live normally with this condition, it would have affected him later in life, so on the recommendation of the surgeons at Sick Kids, we chose to go ahead with surgery. As it turns out, his condition was much more severe, so going ahead with surgery was definitely the best course of action.


As with most surgeries, Logan was not allowed to eat after midnight. Fortunately, he was allowed to have breast milk that morning. I fed him at 6am. We dropped the girls off at a friend's house at 7:40 and then headed to the hospital for 8am. After checking in, we waited to see the nurse. She confirmed that Logan was healthy enough for surgery and then we changed him into a hospital gown. By 9:30, he was visibly tired. He normally goes down for his first nap by 9am. But, with all of the other kids, parents and things to look at, he was overstimulated. We watched doctors come out and talk to parents and patients. We watched babies and little kids walk or get carried into the OR. Anticipation built as we waited for that to be us. As his scheduled 11am surgery time approached, he was becoming cranky from fatigue and hunger. I walked him in the hall and kept him distracted as best I could. While speaking with one of the fellows, he went into full on hysterics. I took him into the hall so Jenn could finish listening to what the doctor was saying. The poor guy was a wreck and couldn't understand why I wouldn't feed him, so I eventually passed him over to Jenn. In a state of sheer exhaustion, he finally fell asleep. His surgery was running late. We spoke with the anesthesiologist and the OR nurse who would be by his side for the entire time. "I have two children of my own. I will treat your son like he's one of my own." Said the nurse. He had been doing this for 24 years and had a level of confidence about himself that was comforting. I wanted to take Logan into the OR myself (parents are allowed to do that at Sick Kids), but it was recommended that we pass him over to the nurse still sleeping. Hopefully, they would be able to gas him while he was still asleep. The transfer was made successfully and we watched the nurse walk through the doors to the OR with our sweet sleeping baby in his arms.

I was desperate to keep it together. To stay positive in my own head. Jenn broke down in tears. That's usually me. I fought back the tears as best I could. We composed ourselves. Our little guy would be ok.

After checking into the surgical waiting room, we were told to expect that he would be in surgery for 2.5 hours. It was suggested that we grab some lunch. I felt weak and exhausted from carrying Logan for hours. I didn't want to eat, but knew that I should get something down. Jenn and I mostly ate in silence. We both agreed that it had been one of the most emotionally difficult mornings of our life.

We recognized that for all of the reasons parents bring their children to the hospital, this is nothing in comparison. The strength of those parents going through severe illness or injury with their children is truly incredible.

After lunch, we sat in the waiting room. Jenn got some work done. I tried to read, but ended up on reading the same sentences over and over again. We watched surgeons come out and take parents into the back room to discuss their child's surgery. We watched "In the OR" change to "In Recovery". I heard the surgeon say Logan's name to the volunteer before we saw him. He called us into the back room to tell us that the surgery had been successful and Logan was on his way to recovery. He explained what had been done. He also said that Logan's condition was much more severe than we were initially told, so it was good that we had gone ahead with it. He said that the end result is perfect and talked about care for the next 10 days or so. He answered our questions and ended with "thank you for letting me take care of your boy." An even bigger 'thank you' for taking such good care of him!

Logan had a general anesthetic and a local anesthetic (caudal block). The caudal block wore off about 6 hours after surgery. Despite the advil and tylenol that he had been given, he was in intense pain. He was screaming, kicking his legs and arching his back. We gave him a dose of morphine and helplessly waited for it to kick in. I held him, but was afraid that I was hurting him. I lay next to him on the bed. Tried desperately to nurse him for comfort. Eventually, he was given some relief from the morphine and fell asleep. He was unsettled though. I lay with him for a while. After an unsettled hour or so of sleep, he woke again, screaming in pain. We were not able to give him anymore pain killers, so I tried to soothe him in any way I could. I then opened the diaper to find that it was full of blood. Jenn and I were both startled and shocked. We carefully changed him and then decided to rush him back to the hospital. I rushed him to the ER and Jenn waited for my brother to come to our house to stay with the girls before coming down to join us.

The ER was packed. Given our reason for being there, Logan was rushed past everyone waiting for the triage nurses and immediately given a room. Fortunately, the bleeding had stopped, but we couldn't figure out what had caused it. After seeing the doctors and speaking with urology, they decided to run some blood work to confirm that he didn't have a blood disorder. The results came back clear and he seemed to be more comfortable. In the early morning hours, we headed home.

Logan came home with a stent (catheter) in. It is being removed 8 days after surgery. That's been the most interesting part of caring for him so far. He is double diapered. The catheter drains into the outer diaper because it is important that it stays clean. For the first several days, he needed to soak in warm water four times per day to help the bandage fall off on its own. After he poops, I gently hose him down in the sink (because he can't be wiped), then let him soak, air dry and finally put on his two diapers. It's a process that can take up to 30 minutes.

Late last week, I discovered that his catheter was full of blood. When I was unable to get a hold of the Sick Kids nurse, I called my aunt, who just happens to be a urology nurse. She was completely calm and told me to get him to drink to see if the blood flushes through. Thank God for her! I was ready to rush back to the hospital. Fortunately, the Sick Kids nurse called me a short while later and said that a small amount of blood is normal, given the trauma that his body has been through, but a blood soaked diaper (like the first night) is not. After some water and breast milk, the blood flushed through. After that scare, I made sure to keep him well hydrated, which means that he's been sleeping with me and nursing like a newborn. His comfort has been my priority for the last week, so I'll deal with the sleep regression later!

In addition to the pain killers, I started him on a homeopathic remedy, arnica, on the day before surgery. Arnica helps with pain, swelling and bruising and can expedite the healing process and the removal of the anesthetics from his system. We were told that day 2 would be far worse for Logan, but as it turns out, the swelling had significantly reduced and he was in good spirits. I do attribute some of this to the arnica.

Kids are amazingly resilient. Jenn and I are both grateful that we dealt with this now. As a baby, he won't remember it and I would imagine that the healing process is easier and quicker that it would be with a toddler or an older child. We are also grateful that his birth defect was easily corrected and shouldn't cause him any more issues in the future. 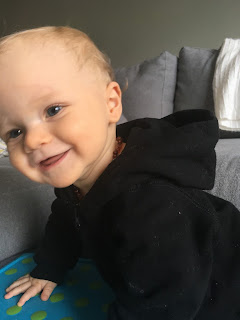 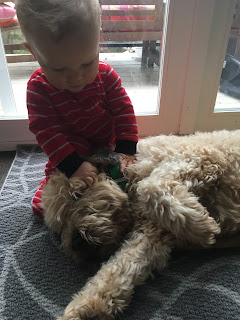