Our giant Shrek-puppy and skinny mini

The boys went in for hair cuts; Riley on Tuesday and Finn on Wednesday. Both of them were extremely shaggy and in desperate need of new 'dos. I was reluctant to take them in because it's been so cold and snowy, but there was no way we could have waited for another month.

Here are the boys before their cuts...adorable and shaggy (and slightly homeless-looking), yes. Easy for me to keep clean, no. Finn on the left and Riley on the right. 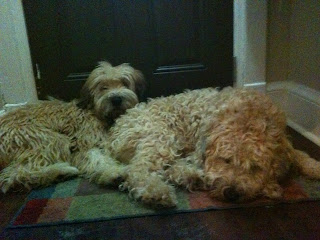 So, I've been a very neglectful dog parent when it came to keeping the boys brushed and mat-free. Growing up with Wheatens, you'd think that I would have learned by now that they need to be brushed regularly, especially when you have two hooligans who get themselves wet and dirty constantly. I got a major lecture from our groomer about the importance of brushing and combing them regularly. This is what happens when you neglect your grooming duties...Riley on the left and Finn on the right: 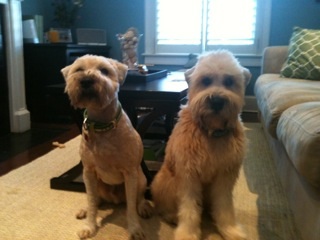 Riley got completely shaved down (and is shockingly not cold at all - I get asked why he's not in a coat by almost everyone). Finn did not get shaved because at 7-months he's still too skinny and doesn't have a ton of body fat, so he would probably get cold. He looks like Shrek because his ears had to be cut super short (a result of mats behind them). Also, please note how HUGE Finn now looks next to Riley. He is officially taller than him.
I'm sorry boys. I've learned my lesson :(
Posted by Ashleigh at 10:41 AM