A Trial Run at Being Big Brothers

I babysat my friend's 8-month old girl on Friday for a few hours. They are heading off on a big trip so she took a few hours to get some things done. Selfishly, I thought it was a great opportunity to see how Riley and Finn would react to a baby.

The two of them were in awe of her from the second we walked in the house. Riley is a gentle soul, so I knew he'd be fine. Finn is 8-months old himself, so I feared that the baby would be a puppy to him. Both of them were great though! They were in her face a bit too much initially - she wasn't having it. Once she warmed up to them, she tried to grab at their faces any chance she got!

She was sitting in the middle of the couch at one point between Riley and me. She kept reaching for him and falling over in the process. I finally moved her closer to him. This was the result: 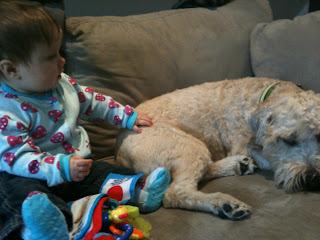 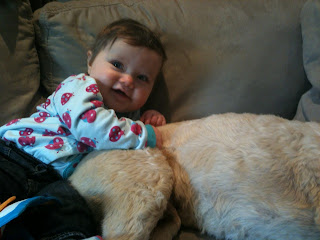 ﻿Riley did try to smother her with kisses a few times, but I promptly ended the love fest. I didn't want to send her home with a rash reeking of doggie breath!
All in all, I think that the boys did great and are definitely ready to be big brother to two little girls!
Posted by Ashleigh at 5:38 PM