Breastfeeding is going to be your "thing." One of our midwives said this to me and unfortunately, it wasn't a good "thing." While I initially struggled with breastfeeding, she said that everyone has a challenge, whether it's pregnancy, labour, delivery or feeding. Mine was and still is, to an extent, breastfeeding because I had an "easy" pregnancy, labour and delivery.

Breastfeeding was/is harder than I ever thought it would be. At times, tandem feeding was something that I doubted I'd ever be able to do. Despite our many setbacks (2 bouts of thrush, mastitis and latching difficulties), I tried very hard to stay positive. While both babies weren't latching initially, Teagan picked it up within a week. But still, it was taking her 45-60 minutes to feed each time. Add 15 minutes of pumping, plus the time it takes to burp and change, and you can see that I pretty much spent all of those initial days feeding, in some form or another. Quinn has been my biggest challenge by far. She wasn't latching at all. We went to three different breastfeeding clinics, had two midwives helping and several nurses. I read everything I could online. I watched videos of "good drinkers" on the Newman Clinic site. In those early days, I could describe exactly what should happen, but couldn't get Quinn feeding for the life of me. When I tried to feed her, she would usually just scream. I would try for up to 15 minutes and feel like I was traumatizing her. It was awful. Like I said, 95% of the time I was positive. But, several times, I broke down in tears. I felt discouraged, thinking that I would never be able to breastfeed her. I was going to remain a cow for a year, feeding Teagan and pumping constantly for Quinn. More than anything, I wanted the freedom to go wherever we want knowing that if my girls were hungry, I could feed them.

Enter Shelly at the Victoria Park Breastfeeding Clinic. Shelly is a lactation consultant. She's different from all of the others I met. She was incredibly positive. I was under the impression that with every day that went by that Quinn wasn't breastfeeding, it was decreasing her chances of it ever happening. Shelly told me immediately that we have all the time in the world. She told me success stories of babies who rejected the breast entirely and began feeding at 3 months. She re-instilled confidence that with practice and a positive attitude, Quinn will feed soon enough. She noticed that Quinn wasn't opening her mouth very wide and suggested that we see an osteopath. She has had 3 treatments from him, which has helped immensely. If you live in Toronto and are struggling to feed, go see Shelly. Tell her I sent you :)

Enter Quinn @ 10 weeks old: My mini-Quinny is successfully breastfeeding! She feeds in 20 minutes at times (max 35 minutes). I'm so proud of her.
Enter Teagan @ 10 weeks old: My TT is feeding in as little as 10 minutes! We've come along way from those 1 hour marathon feeds!
This is not me, obviously, but I now feed Teagan and Quinn as happily as this woman feeds her twins! Look at her multitask...feeding 2 babies, talking on the phone and eating dinner! Amazing ;) 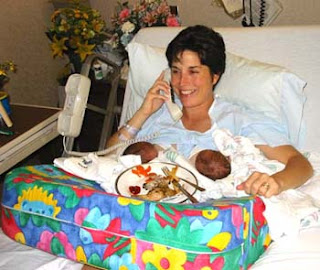