The girls have been eating solids for almost two months now. I feel fortunate to have two very good eaters. They have yet to reject a food. As I mentioned in my previous food post, I've been doing a combination of purees and Baby-Led Eating (Weaning).

I usually steam their fruits and veggies first. It makes the foods a little bit easier to digest.

They've tried tons of different fruits and veggies. Most recently, we started green beans. I gave them a few to gnaw on but also made a puree. Per usual, Quinn was all about feeding herself and Teagan was somewhat indifferent. 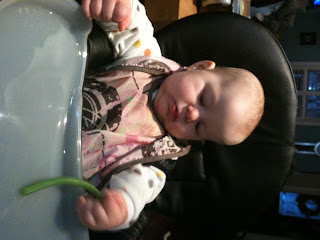 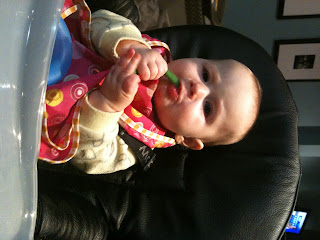 If you have young babies yourself, have you tried peas yet?

Peas on their own are pretty boring, I have to say. A few weeks ago, I pureed peas and tried them myself. I was less than impressed so I understand why the girls were also uninterested. They still ate them though! Anyways, last night, I steamed and pureed peas with some fresh mint. They LOVED them! I also put a few steamed peas on their trays to see if their pincer grasp has developed yet. They grabbed those peas like old pros! I tried to get pictures of it, but it was a bit more challenging.

There is a pea in between those little fingers: 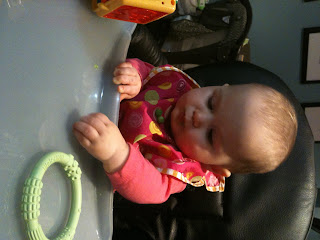 We are sticking to fruits and veggies for now. At around the 9-10 month mark, I will introduce some beans and then meat. I'm going to hold off on all grains until closer to the 1 year mark. Based on my reading and research, the early introduction of things like dairy and wheat play a large part in the development of allergies, eczema and frequent colds/flus and other illnesses.
And finally...a few weekends ago, while eating a pear, I could feel two eyes staring me down. I decided to share... 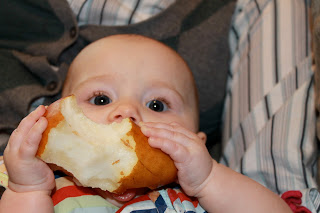