The Littlest Bully That Ever Was 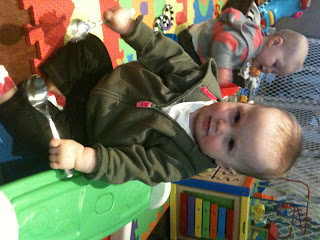 This is the face of the spoon thief. Do not be fooled by this adorable, pint-sized 10-month old. Less than 2 minutes before this photo was taken, Teagan was holding both of those spoons.

Quinn has become quite the little bully in recent weeks. It doesn't matter what her sister is playing with, she wants it. She will do anything to get it and almost always wins. She has also been known to hit Teagan when things do not go her way.

I let them play on their own every day, but I'm always close by. They almost always play close to each other and usually interact quite a bit. I'll often find them under the table giggling at one another. Sometimes one will do something that the other finds hilarious and then do it repeatedly. But, sometimes I look over to see Quinn grabbing a toy from Teagan's hands, which usually results in tears. Most recently, Teagan has started crying when Quinn gets close to her. I don't think Quinn is intentionally trying to hurt her, but I think that that's how Teagan sees it.

I do my best to find a happy medium between stepping in and letting them settle it on their own. I don't want to always be coming to Teagan's rescue, but at the same time, I don't want Quinn to think that taking something from her sister is ok. I doubt she understands when I tell her that she can't take the toy that Teagan was playing with, but I figure it's worth starting these lessons early. Teagan can also be a bit of a drama queen. She can really turn it on. I've gotten pretty good at discerning her cries.

Quinn is almost always the smallest of her playmates. Other moms will tell their children to be careful when playing around little Miss Q. I laugh because she'll play tug-o-war with baby twice her size and often win. She's incredibly strong for such a little thing. She's also very determined.

How do you deal with battles over toys or your child hitting others?