I meant to post yesterday since that was the girls official first day of preschool. It was an emotional one that started off difficult and ended perfectly.

The school hosted an orientation last week. The girls got to see their classroom and play for an hour. We met their teachers and the coordinator. Last week, we talked about school and tried to explain that I would be dropping them off (and saying goodbye) and then coming back to get them. They are doing a 2-morning per week (2.5 hours) program.

I had some first day of school jitters. I also felt quite emotional since the girls have been with me since they were born (apart from time with family and a couple of babysitters). I knew that it was going to be hard for me, especially if they were upset.

Upon our arrival at the school, Quinn happily trotted up the stairs. Teagan insisted that I carry her. We found their cubbies and hooks. Quinn changed into her indoor shoes. When I tried to take Teagan's knapsack off, she freaked out. Quinn then walked into the room to check it out. I was impressed. Teagan, on the other hand, wouldn't let me go. I didn't want our goodbye to be long and drawn out. I gave them both a kiss and told them that I would be back to get them after school. At that point, Quinn flipped out and started crying. She had thought that I was staying. Teagan was hysterical and had to be pried from my leg. I walked out and could hear them wailing from the sidewalk.

Knowing that they would be fine and would eventually have fun didn't make that experience any easier. I called Jenn immediately. I stayed strong...until I got home. I had a cry and the boys consoled me. I then took them for a long run.

About an hour and a half into school, the coordinator called. She was calling everyone. The girls settled after about 10 minutes and were playing happily at the sand table while we spoke. They were already making friends with the other kids. While I knew that would be the case, I was grateful for her call.

My brother and I picked them up before lunch. They were in the playground. Quinn saw me when we arrived and immediately gave me a hug. She then ran off to play. Teagan spotted me just before she went down the slide. She smiled, slid down and then headed straight back up! I chatted with their teachers for a few minutes. I gave them a five minute warning, which probably ended up being longer. I was thrilled to see them having fun.

Here's to hoping tomorrow morning is much of the same!

After their nap, we headed to the park. I snapped a few pictures of my preschoolers. They looked older :) 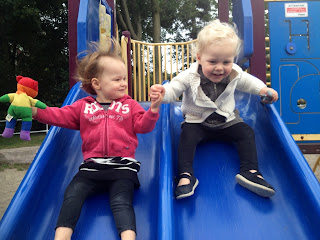 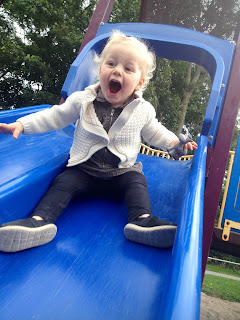 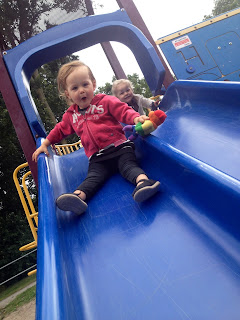