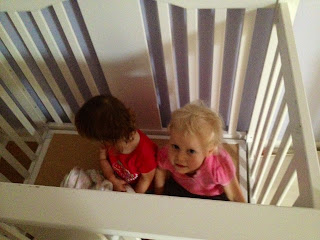 This picture doesn't look like much. It is what you don't see that makes it.

I thought (read: REALLY, REALLY hoped) that we had until January before the monkeys started climbing out of their cribs. Given their destructive history, I've been dreading the switch to beds. Quinn made the first move two weeks ago at nap time. She climbed out of her crib three times in 20 minutes. For the next week, I lay on their floor at nap time until she fell asleep. Fortunately for me, she fell asleep quickly. I was delaying the inevitable, I know.

Jenn walked into their room at nap time yesterday to find Quinn asleep and Teagan standing in the middle of their room naked with her clothes, mattress and sheets everywhere. She was chatting (to herself) about "sleeping Mimi" and was apparently an inch away from grabbing her. I'm grateful that poop has remained IN their diapers.

Needless to say, toddler beds have been ordered. Wish us luck!